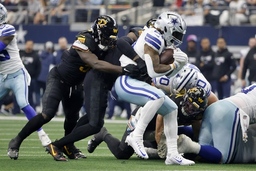 FRISCO, Texas (AP) The Dallas Cowboys are in no rush to get Dak Prescott back at quarterback, thanks to Cooper Rush.

A trip to Los Angeles to face the defending Super Bowl champion Rams on Sunday seemed a good plan for Prescott's return when the prognosis improved from as many as eight weeks to as few as four.

Owner Jerry Jones sounded as if more healing time for the fractured right thumb might be in order after Rush improved to 3-0 as a starter this season and 4-0 for his career in a 25-10 victory over Washington.

"As we look to the future, Dak is an ingredient to our success that's really a must," Jones said Sunday. "The first thing that happened when Dak went down that early, literally after the first game, I thought, `Oh, have we shortchanged ourself? Have we really got this quarterback thing addressed?'

"So I'll tell you this. (Rush has) answered any apprehension I had about our ability to go out here and compete."

The Cowboys (3-1) aren't dominating on offense without their $40 million QB.

Far from it. Dallas is in the bottom 10 in the NFL in points, total yards, passing yards and third down conversions.

But Rush hasn't thrown an interception in 102 passes this season (two against Washington were nullified by penalties). The undrafted sixth-year pro has led timely touchdown drives in the past two victories.

This surge started with the 20-17 upset of defending AFC champion Cincinnati, with Rush getting Dallas in position for the winning field goal after Prescott's injury in the season-opening loss to Tampa Bay.

"I think he knows he's got a lot of confidence in the offense, that he knows where the cars are on the field," Jones said. "I can't say enough about his play. It's far more than what I would've expected."

The question for Prescott is whether he can grip the ball with enough force to play in a game. Jones said the bone didn't have to heal completely because of the plate that was surgically inserted.

"We don't know if he is in position to throw the ball," Jones said. "We have to get to play at the first of the week. We will see how that goes. I don't have any way to access whether he is going to play this week."

Dallas is winning with defense. The four touchdowns allowed through four games match the 1970 and 1972 teams for the fewest in franchise history.

While the Cowboys had to settle for two sacks a week after Washington's Carson Wentz was dropped nine times, they did force two intentional grounding penalties and a slammed water bottle on the sideline from the frustrated QB. Dallas (15 sacks) entered Monday second in the NFL behind Philadelphia (16).

"I'll repeat it again," reigning NFL Defensive Rookie of the Year Micah Parsons said. "I think we've really got a chance to be the best defensive team in this league."

The inconsistency of the running game is back. Ezekiel Elliott and Tony Pollard combined to average barely 2 yards per carry in 27 attempts. This was a week after averaging 6.4 yards on 28 runs.

They had six negative rushing attempts between them, the most in a game in their three-plus seasons together. Pollard had a career-high four.

Mike McCarthy probably moved up the list on the odds for next coach fired after a poor showing, and the Prescott injury, in the loss to the Buccaneers. The doom-and-gloom outlook wasn't good.

Jones expressed confidence in the Super Bowl-winning coach from Green Bay going into Week 2. McCarthy has shown why.

"It's like a picture to me, a boxer, a fighter, walking out and just getting hit the best shot you absolutely could right on the chin, first step out," Jones said. "How do you get that all back together?

"Give him his due. He has managed to right the ship, steady it, and then progressively get this team in shape to play without Dak. That's a team-wide thing."

TE Dalton Schultz might have tried to come back too soon from a knee sprain sustained in Week 2 against the Bengals. He went without a catch for the first time since becoming the primary option at his position following Blake Jarwin's season-ending knee injury in the 2020 opener.

All-Pro RG Zack Martin was out of the game briefly in the third quarter after colliding with another player and favoring his right leg. ... CB Jourdan Lewis, who battled a hamstring injury during training camp, was a late scratch with a groin issue. Lewis' injury led to the first defensive snaps and first interception for rookie DaRon Bland.

90-plus - Rush is the fifth QB in league history, and first for the Cowboys, to have a passer rating of at least 90 in each of his first four career starts. The 107.5 rating against the Commanders was the best of those four games.

The Super Bowl champs will have Dallas' attention in LA. Looming for the defending NFC East champion, though, is currently undefeated - and division-leading - Philadelphia in prime time Oct. 16.