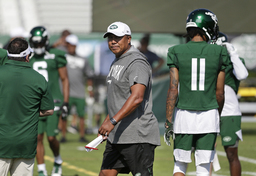 Ward, who played his entire 14-year career with the Steelers and was MVP of their Super Bowl win over Seattle in 2006, is getting his first opportunity to be a head coach with San Antonio in the new XFL. The league relaunches in February 2023.

"It's definitely been a humbling experience for me," Ward said on the AP Pro Football Podcast. "I see a lot of similarity in the city of San Antonio as I do with Pittsburgh - passionate fan base, small market, as far as not being a big city. I know they're passionate for football and they're super excited to have a professional team come to their city."

Ward got a taste of Texas fandom when he went to the UTSA-Houston game on Sept. 3. The Cougars won in triple overtime, 37-35.

"It definitely felt like Pittsburgh part two," he said. "There were some passionate fans and they were extremely happy for me to be down there. So to have that support and see how the Alamodome was rocking during the college game, man, I just want to build on that and create that culture that the city of Pittsburgh has with their football team. That's what I'm trying to create down in San Antonio."

The 46-year-old Ward had 1,000 catches for 12,083 yards and 85 touchdowns for the Steelers. He made four Pro Bowls and was part of two Super Bowl championship teams.

Ward began his coaching career in 2017 as an offensive intern with the Steelers, working with their wide receivers. He spent two seasons as an offensive assistant with the New York Jets from 2019-20.

"It was kind of like The Twilight Zone," Ward said. "You wake up and in a weird room or something. For me, I just never donned any other color than the black and gold. It was a great learning experience for me to be a part of another organization to see how they did things and I learned a lot. Even though we didn't have success record-wise, it was so valuable for me to experience going to another organization and seeing how they do things. It helped me in my development and growth as a coach to understand because I had never gone through a losing season like that where you haven't won a game and it's late in the year and you're 0-13 and the players are looking at the coaches and seeing how you guys respond, so I learned a lot. I'm very fortunate for Adam Gase to give me an opportunity to get in there and I worked with some great coaches."

Ward aspires to be a head coach in the NFL. Despite his limited experience, he got an interview with the Houston Texans before they hired Lovie Smith earlier this year.

"Helping young men achieve their goals, that's why I enjoy coaching," he said.

Ward also wants to help men lose weight. He's serving as an ambassador for the NFL Alumni Association's Huddle Up: Let's Talk Obesity campaign. His personal battle with weight gain inspired him to join the cause.

"I've put on some weight and enough is enough, man," he said. "I went to the doctor, luckily, and during my physical, you start talking about high cholesterol and being pre-diabetic. And that's something that hit home to me because I've lost some family and friends to diabetes. It was an eye opener, a wake-up call for me to make a life change as far as eating right, exercising more and understanding that obesity is a medical condition, not a character flaw. I think for a lot of people, they're just scared to go to the doctor because they don't want to hear the negative things. But luckily for me, I did. I want to make sure I invest in myself so I can live as long as I possibly can. And, I just think it's cool that people can hear my story."