49ers offense with Garoppolo falls flat in loss to Broncos 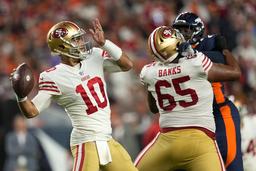 SANTA CLARA, Calif. (AP) Seven punts, three turnovers and an inexplicable play when Jimmy Garoppolo stepped out of bounds in the end zone for a safety summed up the night for the San Francisco 49ers offense.

Now they have to go forward for the next few weeks without perhaps their best offensive player.

All-Pro left tackle Trent Williams suffered a high ankle sprain during San Francisco's 11-10 loss to the Denver Broncos on Sunday night and will miss at least a few weeks.

Coach Kyle Shanahan said Monday that the injuries typically take four to six weeks to heel, but didn't rule out an earlier return for Williams.

The Niners did very little offensively when Williams was in the game and even less after he left. The final five drives without Williams produced four first downs, two punts and two turnovers. The only score came on a field goal on a drive that started on the Denver 41.

The Niners went 1 for 10 on third downs, got two long runs from Jeff Wilson Jr. but nothing else on the ground and a shaky performance by Garoppolo in his first start of the season.

He missed chances for big plays in the first half and failed to do much of anything in the second half with his safety the biggest mistake.

"I just felt that we were not in rhythm," Garoppolo said. "We started off pretty good. I felt like we were in a rhythm early, but then we just got away from it. Things did not go our way."

Defense. The one consistent aspect for the Niners this season has been the defense, which has held all three opponents to fewer than 20 points this season. San Francisco forced nine three-and-outs - the most in a game for any team since 2014 - and allowed only 3.7 yards per play.

Pass blocking. The Niners had issues in pass protection even before Williams got hurt with the Broncos exploiting the right side of the line early in the game. Both right tackle Mike McGlinchey and right guard Spencer Burford allowed three pressures, according to Pro Football Focus.

Special teams. A year after having one of the worst special teams units, the Niners have been much better this season. The highlight of the game for San Francisco was the punting. Mitch Wishnowsky averaged 51.7 yards per punt with a new average of 44.7. Samuel Womack did a great job downing a punt at the 1 and Denver started two other drives at the 6 following punts.

Garoppolo. After a promising relief appearance in Week 2 after starter Trey Lance got hurt, Garoppolo showed the flaws that led the Niners to trade three first-round picks to draft Lance in 2021. He went 18 for 29 for 211 yards, but missed on some chances at big plays, turned the ball over twice and had the safety.

LB Azeez Al-Shaair (knee) is expected to miss about eight weeks. ... TE Ross Dwelley (ribs) is day to day. ... OL Daniel Brunskill (hamstring) could return to practice this week for the first time since getting hurt in the exhibition opener.

The 49ers host the Rams on Monday night in a rematch of last season's NFC title game won by Los Angeles. San Francisco has won the past six regular-season matchups.