Cardinals can't stop first-half woes in another loss to Rams 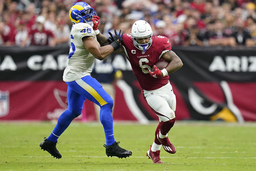 GLENDALE, Ariz. (AP) The Cardinals are playing the first half of football games as if they just rolled out of bed.

The good news for Arizona is they do eventually wake up. The problem is it's usually too late.

The Cardinals fell behind 13-0 during the first half in Sunday's 20-12 loss to the Los Angeles Rams, which was their 11th loss in 12 games in the series against their NFC West rival. The slow start continued a frustrating trend - Arizona has been outscored 56-13 in the first half of the season's first three games.

The only reason the Cardinals (1-2) aren't winless this season is because of a stunning comeback one week ago when they rallied for a 29-23 overtime win over the Raiders after trailing 20-0 at halftime.

"You can't have miracle comebacks every single week," Cardinals defensive lineman J.J. Watt said. "You have to play sound football and put yourself in a good position early and we're not doing that right now."

It seems like an eternity ago that the Cardinals started last season 10-2 and looked like one of the NFL's best teams. They've lost seven of nine games - including the playoffs - since last December.

Arizona's defense held its own Sunday against the defending Super Bowl champs, so that's a positive. Now that Watt is healthy, the team's defensive line has noticeably improved. The Cardinals are also very good at safety with Budda Baker and Jalen Thompson.

"We just have to put a whole game together," Watt said. "We have spurts here and spurts there. But we have to put a full game together on offense, defense and special teams where everybody is playing complementary football and we're not doing that right now and this is what happens."

QB Kyler Murray had some good moments Sunday and finished 37 of 58 passing for 314 yards. The Cardinals were still unable to score a touchdown.

Arizona's having trouble generating big plays without three-time All-Pro DeAndre Hopkins, who is out three more games while he serves a six-game suspension for violating the NFL's rules on performance-enhancing drugs. The team is also dealing with injuries to other receivers such as Rondale Moore, A.J. Green and Antonie Wesley.

That leaves a stable of mostly smaller receivers such as Greg Dortch, Andre Baccellia and Andy Isabella, along with tight ends like Zach Ertz, Maxx Williams and Trey McBride.

WR Marquise Brown had his most productive afternoon as a member of the Cardinals, catching 14 passes for 140 yards. Murray and Brown played together in college at Oklahoma and the two look like they could combine for a productive season.

RB James Conner has had a slow start to the season with just 90 yards rushing. The lack of production isn't totally Conner's fault. The Cardinals have had to rely on the passing game during the first three weeks because they're falling behind early.

Conner was selected for the Pro Bowl last season after scoring 18 touchdowns, including 15 on the ground.

Kingsbury said Green has a bone bruise and could miss some time. ... DL Rashard Lawrence (hand) had surgery and won't play this week. ... LB Zaven Collins (shoulder) is day to day, but Kingsbury is optimistic he'll play next weekend.

81 - That's the number of offensive plays the Cardinals ran against the Rams. They still failed to score a touchdown, settling for four field goals from Matt Prater.

The Cardinals travel to face the Panthers on Sunday. Arizona has been much better on the road than at home over the past few seasons, so maybe a cross-country will help the Cardinals solve their first-half woes.