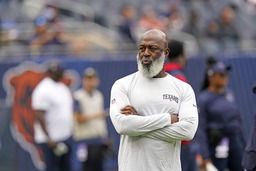 HOUSTON (AP) The Houston Texans failed to score in the fourth quarter again Sunday against the Chicago Bears to remain winless through three weeks.

Houston has not scored a single point in the final quarter this season, leaving coach Lovie Smith searching for ways to get his team to close out a game.

The Texans (0-2-1) led Indianapolis by 17 points entering the fourth quarter in their opener before settling for a 20-20 tie. Last week, they were up 9-6 after three quarters in a 16-9 loss to Denver.

They were tied Sunday to start the fourth before falling 23-20 to Chicago on a last-second field goal. That score was set up when Davis Mills threw an interception deep in Houston territory.

It was the second interception of the day for Mills, who was picked off in the end zone in the first quarter.

Smith was asked why Mills has struggled so much in the fourth quarter.

Mills understands why the focus is on the team's fourth-quarter failures, but believes the only way to turn things around is for the team to play better throughout games.

"I don't think at this point we're a team where we can come back from a lot of mistakes if we make them," he said. "We've just got to execute at a high level from the start, start fast and finish and just really do our thing."

The Texans intercepted Justin Fields twice Sunday to give them five takeaways this season, which is tied for seventh in the NFL.

Smith preaches about the importance of forcing turnovers constantly. But the team's former defensive coordinator was disappointed the Texans didn't turn either of those turnovers into points Sunday.

The Texans allowed 281 yards rushing despite Bears top running back David Montgomery leaving early in the game with injuries. Khalil Herbert filled in and ran for a career-high 157 yards and two touchdowns as the Bears had their biggest rushing day since piling up 284 yards in a loss to the Cowboys on Sept. 30, 1984, with Walter Payton in the backfield.

It is the third-most yards rushing the Texans have given up in franchise history, behind the 288 they allowed to the Titans in the 2020 season finale and the 320 they gave up in October 2005 against the Seahawks.

The Texans rank last in the NFL by allowing 202.3 yards rushing a game.

"Technique," he said. "We've got to use our hands. We've got to be in our gaps. In this league, you can't arm-tackle guys. Running backs are way too strong. They're way too powerful. For us, it's just about being gap disciplined."

Mills had his worst game of the season, throwing two interceptions after not being picked off in the first two games.

Smith said the second-year player must make better decisions after his late interception allowed the Bears to seal the victory.

The team didn't report any injuries after Sunday's game.

30 - The Texans have been outscored a combined 30-0 in the fourth quarter this season.

The Texans must improve their run defense and limit their mistakes if they hope to get Smith his first win as the team's head coach Sunday when they host a Chargers team trying to end a two-game skid.