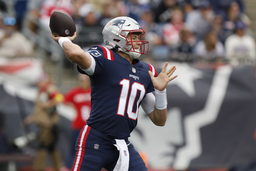 His third interception sealed the Patriots' 37-26 loss to the Baltimore Ravens on Sunday.

The injury could doom the rest of their season.

Jones completed 22 of 32 passes for 321 yards, and he also made like Ravens quarterback Lamar Jackson by scampering for a 3-yard score - his first career rushing touchdown. But the second-year signal-caller, who has never missed a start, has now left back-to-back games with injuries, and this one appeared serious.

Jones was picked off in third quarter, on the second play after Jackson hit Devin Duvernay for a 4-yard touchdown that gave the Ravens a 28-0 lead. He was intercepted again with nine minutes left in the fourth, overthrowing DeVante Parker in the end zone when trailing 31-26 after New England drove to the Baltimore 10.

But the one that could linger was at the 2-minute warning, when Ravens lineman Calais Campbell brought Jones down in the backfield just as he unloaded the ball toward Kendrick Bourne. Marcus Peters came down with the ball, and the 307-pound Campbell came down on Jones' left leg.

Jones grimaced in pain, reached for his ankle and then pulled himself up on one leg before hopping off the field and heading to the locker room. Coach Bill Belichick said he had no information on the injury, but Patriots spokesman Stacey James confirmed that Jones had a leg injury and would not be available to reporters.

The Patriots have 36-year-old Brian Hoyer as their backup, with rookie Bailey Zappe as their No. 3 quarterback.