‘We’ll never give up’: Dolphins send message with huge win 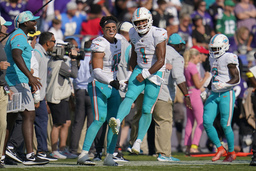 MIAMI GARDENS, Fla. (AP) After playing perhaps the best game of his career in an amazing rally to win at Baltimore, Miami's Tua Tagovailoa deflected attention to his teammates.

"I'm always confident in what I can do, confident in myself," Tagovailoa said. "But I think that just shows the resiliency of our team. It brings all our confidence up, confidence in one another, confidence that if the offense has a turnover that the defense is going to get us the ball back."

But after he threw for a career-high 469 passing yards and six touchdowns in Sunday's improbable win, Tagovailoa's teammates did the bragging for him.

"All you gotta do is look at his game film," receiver Tyreek Hill said. "It's Tua, and who he is and how consistent he is."

"I've been seeing it in Tua," cornerback Xavien Howard said. "I feel like he is only getting better each game."

Dolphins coach Mike McDaniel said he'd hoped his team would experience some adversity after its win over the Patriots in the season opener, and the Dolphins faced a three-touchdown deficit entering the fourth quarter.

Tagovailoa threw a touchdown pass to River Cracraft at the beginning of the quarter, then followed with 48- and 60-yard TD passes to Hill. Jaylen Waddle caught the go-ahead touchdown with 19 seconds left.

Through two games, the Dolphins have shown that they're capable of both protecting a lead and rallying late.

Sunday's performance against a strong opponent on the road was an early statement win for McDaniel and a sign the Dolphins can contend for their first playoff berth since 2016.

McDaniel's ability to take advantage of Hill and Waddle's speed on the outside has put immense strain on opposing defenses. Both of Hill's touchdowns Sunday were a result of miscommunication in the Baltimore secondary, but Hill also seemed to be running twice as fast as any defender.

McDaniel said he wanted to get Waddle involved more than in Week 1, and the result was 11 receptions on 19 targets, 171 yards and two touchdowns.

The Dolphins' defense stepped up in the second half after giving up several big plays to the Ravens. But the pass rush wasn't much of a factor.

Miami is tied for 27th with two sacks this season, both of which came in the opener. The Dolphins barely got any pressure on Lamar Jackson. Last year, Miami sacked the Ravens quarterback four times.

Tagovailoa silenced his critics at least for one game. The third-year quarterback made poor decisions on his two interceptions, but that was erased by a fourth quarter in which he threw for 199 yards and four TDs.

It definitely helps when his targets are running wide open through the opponent's secondary, but Tagovailoa made the throws when he needed to.

Howard was beaten on Rashod Bateman's 75-yard touchdown catch in the second quarter. The Dolphins have struggled defending the pass as a whole, but Howard, one of the best cornerbacks in the league, was beaten on several plays in the first half. Howard also dropped a potential pick-6 in the fourth quarter.

WR Cedrick Wilson injured his ribs in the fourth quarter. McDaniel said imaging showed no breaks, but "it's hurting pretty bad and will be a day-to-day situation."

21 - The Dolphins overcame a 21-point halftime deficit, which is tied for the second-largest comeback win in franchise history. It was the first time in 12 years an NFL team has rallied from a 21-point deficit in the fourth quarter to win.

The Dolphins have another big test Sunday at home against the Buffalo Bills.