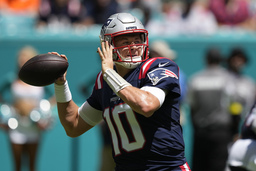 Jones was a full participant for Wednesday's practice after suffering a back injury during New England's Week 1 loss at Miami.

He said on Wednesday that his back was feeling good and he expected to play on Sunday at Pittsburgh.

If Jones does have to miss Sunday's game, backup Brian Hoyer would be in line to make his first start since Week 4 of the 2020 season. He stepped in that week for Cam Newton, who sat out the Patriots' 25-10 loss at Kansas City with COVID-19.

Rookie Bailey Zappe is the third quarterback on New England's roster. He was a healthy scratch in Week 1.

Hoyer has made starts for seven NFL teams during his 14-year career, but has lost his past 11 and amassed a record of just 16-23. The 2020 loss to Kansas City was his lone start with the Patriots. He was benched during the game in favor of Jarrett Stidham.