Eagles hoping addition of Brown will help against Lions 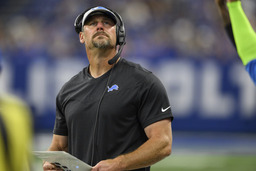 DETROIT (AP) A year ago, the Philadelphia Eagles were a playoff team that routed the woeful Detroit Lions 44-6.

That result aside, both teams are fully aware of the areas they need to improve as they head into the season opener.

The Eagles were largely one-dimensional during their march to the playoffs last year, and the Detroit game was a good example. Jalen Hurts threw for 103 yards as Philadelphia did most of its damage on the ground. The Eagles finished with 236 yards rushing, eight more than the Lions' offense generated overall.

Hurts was more impressive as a rusher than a passer last season - finishing with 784 yards on the ground and 10 scores - and while the Eagles led the NFL in rushing, they didn't have a receiver who topped 1,000 yards.

He has a sign in his locker reading "Always Open."

He wasn't cheap - the Eagles traded the No. 18 pick and a third-round choice to Tennessee for him, then signed him to a four-year contract worth at least $57 million - and he knows he has to produce.

"I have a job, I have a responsibility, I've got to go out there and make plays and do what I do," he said.

The Lions, coming off a 3-13-1 record in their first season under coach Dan Campbell, are also counting on their offense to become more dynamic. They also acquired a starting wideout, signing DJ Chark to a $10 million, one-year deal.

However, the group has never played together in an NFL game because of injuries, and that's not going to change Sunday. Vaitai is started the season on injured reserve with a back injury, Ragnow missed Thursday's practice with a groin injury, and Vaitai's backup, Tommy Kraemer, was also out with a back problem.

Campbell said his offensive line will be ready, no matter who makes it onto the field.

"The O-line, as long you get a group of guys that know how to work together and they're tough and they're smart, you can make great things happen," Campbell said. "We've got plenty of that still up there, so we'll be fine."

Brown isn't the only Eagle with something to prove on Sunday. Cornerback Darius Slay spent his first seven seasons anchoring Detroit's secondary, going to three Pro Bowls and earning All-Pro honors in 2017.

In 2020, though, the Lions took CB Jeff Okudah (Ohio State) with the third-overall pick and Slay found himself in Philadelphia. In two years, Okudah has played just 10 games, intercepted one pass and allowed a 77.2% completion rate.

Meanwhile, Slay has played 31 games for the Eagles and given up a 68.0% completion rate for fewer yards than Okudah. He has also intercepted four passes, returning one for a touchdown, and returned two fumbles for touchdowns.

One of Slay's scores came on a 33-yard fumble return against the Lions last season, giving the Eagles two touchdowns in 11 seconds and a 38-0 lead.

"He's always in the right spot, in the right phase and near the ball," Goff said. "He's a hell of a player, and I have a lot of respect for him."

Lions DE Aidan Hutchinson, the No. 2 pick in April's draft, said he's already been offered a post-game jersey swap with long-time Eagles DE Brandon Graham. Both players grew up in Metro Detroit and played at Michigan before becoming first-round picks.

Hutchinson said he's flattered by the offer, but might want to keep his jersey from his first NFL game.