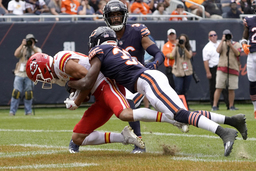 CHICAGO (AP) The president of the NFL Players Association blasted the conditions at Soldier Field on Saturday, and he didn't exactly get an argument from the Chicago Bears or Kansas City Chiefs after their preseason game.

Union president JC Tretter tweeted the field was not up to NFL standards.

"The NFL said that this field met minimum testing standards," he wrote. "We clearly need to re-evaluate what is an acceptable surface for players to compete on. We need new testing metrics looking at the performance and safety of every field. The NFL can and should do better."

Chicago quarterback Justin Fields said things were worse when the Bears practiced there Tuesday rather than at their suburban headquarters. He also said he tries to use the conditions to work in his favor.

The conditions didn't seem to bother Kansas City's Patrick Mahomes. The four-time Pro Bowler threw for 60 yards and a touchdown on the Chiefs' first possession and then called it a day.

"I think they had a concert so there was some stuff here and there, but it wasn't any crazy, bad (stuff) or anything like that," he said. "I love playing here at Soldier Field. It's an awesome stadium. You feel the history of it."

The conditions at Soldier Field have long been a source of frustration for players and coaches on the Bears as well as other teams. The lakefront location and harsh weather make maintaining the surface difficult for the Chicago Park District, which owns the stadium.

The field was particularly choppy after Elton John performed there last weekend. Major League Soccer recently moved the Chicago Fire's game against New York City FC scheduled for Aug. 21 to SeatGeek Stadium in suburban Bridgeview, Ill., because of conditions brought on by "a series of planned events at the venue."

As for how the field was on Saturday?

"A lot better than my high school field looked," Chiefs coach Andy Reid quipped. "Not much."