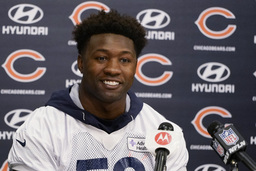 LAKE FOREST, Ill. (AP) The contract standoff between the Chicago Bears and Roquan Smith continued Thursday with the star linebacker watching practice from the sideline and new coach Matt Eberflus saying he expects healthy players to participate on the field.

The Bears removed Smith from the physically unable to perform list on Wednesday, opening up the possibility of fines for missing practices, a day after he went public with a trade request. Eberflus declined to discuss what actions the team might take.

"I'm not gonna get into the details of what discipline is there," he said. "But we will certainly work through that when the time comes."

Eberflus did make one thing clear.

"We expect all of our healthy players to practice," he said.

Smith, who does not have an agent, accused the Bears of using bad-faith tactics during negotiations for a contract extension in a statement to NFL.com on Tuesday. He said the front office led by new general manager Ryan Poles has made take-it-or-leave-it offers since talks began in April that would be "bad for myself, and for the entire LB market if I signed it."

Poles said this week he planned to continue to work toward an extension rather than a trade. He also insisted his feelings about Smith have not changed, that he still thinks highly of him.

But the Bears' new regime has a challenge on its hands with one of the team's best players in a stare-down with the organization.

"For me it's about being respectful to everybody in the building," Eberflus said. "Do I certainly know what Roquan's going through? I don't know. I'm not in his chair. I don't know that. You never put yourself in another man's shoes. His perspective may be something different. That's where he is. I'm gonna be respectful of that."

Eberflus told reporters in his opening statement they would have to ask Smith why he decided not to practice. He also said they'd have to ask Smith in response to questions about what he can accomplish by watching from the sideline and if he'll participate without a new deal.

"I don't have that understanding one way or the other. I don't know. You'll have to ask him," Eberflus said.

The team has not made Smith available to the media since training camp opened because he is not practicing. Eberflus said he thought there was a possibility Smith would participate on Thursday.

"Like I said I expect all the healthy guys to practice," he said.

The Bears hired Poles and Eberflus to replace the fired Ryan Pace and Matt Nagy after going 6-11 and missing the playoffs for the ninth time in 11 years. Eberflus and his staff plan to use Smith as a weakside linebacker in a 4-3 scheme.

The Bears' first preseason game is against the Kansas City Chiefs at Soldier Field on Saturday. They open the season at home against San Francisco on Sept. 11.

But they're missing one of their most important players as they try to implement a new scheme.

But are the lines open?

"That's going to be with Ryan and Roquan to deal with," Eberflus said.

NOTES: Eberflus said WR N'Keal Harry had ankle surgery and did not give a timetable for his return. He also said RB David Montgomery and TE Cole Kmet will miss Saturday's game with undisclosed injuries.