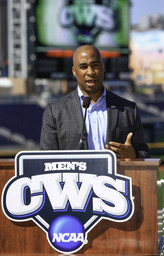 Owner and CEO Greg Penner made the announcement Thursday, his second day on the job.

Leech has a quarter-century's worth of experience as a sports executive at the college and professional levels and spent the last three years as CEO of NFL International.

Leech takes over from Joe Ellis, who stepped down this week as CEO and team president after the Walton-Penner group's $4.65 billion purchase of the team was unanimously approved by the league's other owners.

Leech will lead the business operations of the team and Stadium Management Co., which operates Empower Field at Mile High.

He will report directly to Penner, as does general manager George Paton, who is in charge of football operations.

"As we sought to identify a dynamic, forward-thinking and inspiring leader to guide the Broncos into this exciting new chapter, Damani stood out among several very qualified candidates," Penner said in a statement. "There was a high degree of interest in this opportunity with the Broncos, which speaks to the reputation of this organization and Damani's strong credentials."

In a statement, Leech said, "Greg and the other partners are visionary leaders, and the trust they have shown in me is deeply humbling. I'm thrilled to support our world-class ownership, leadership team and staff on this journey to drive innovation and growth throughout every area of the Denver Broncos."

Leech spent 17 years at the NCAA's national offices in Indianapolis before joining the NFL as vice president of football strategy and business development in 2015. He served as chief operating officer of NFL International from 2019 until this year.

Leech was a three-time first-team All-Ivy League selection as a defensive back at Princeton, where he earned his bachelor's degree in arts and public policy in 1998. He got a Master's degree in higher education administration from Indiana University in 2004.

Like the three limited investors in the Broncos' new ownership group, Leech is Black. NFL Commissioner Roger Goodell has set forth a goal to bring more racial diversity into ownership groups, front offices and coaching staffs.