Smith, Lock remain in the spotlight of Seahawks minicamp 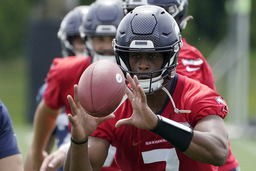 RENTON, Wash. (AP) Geno Smith considered the idea of leaving Seattle in the offseason during his brief stint as a free agent.

And then he was presented with the opportunity of being a starting quarterback once again without having to start over with a new team.

"I was definitely thinking about some other offers," Smith said Wednesday, the first time the veteran QB spoke to the media since re-signing with Seattle in April. "Obviously, wanted to be back here but had a few teams that were interested. Just kind of was in a waiting period at that time, but I'm glad I'm here, glad it all worked out and I was able to get signed here."

Smith is at the center of Seattle's biggest unknown as the Seahawks gather for minicamp this week. The question of who will be the replacement for Russell Wilson as Seattle's starting quarterback is an ongoing debate with an answer that's not expected to be made until sometime in August.

Despite clamoring from fans for additional options to be added to the QB competition, the Seahawks seem set that it'll be either Smith or Drew Lock as the starter when the regular season begins in September.

For Smith, it's a replay of his rookie season when he beat out Mark Sanchez to be the starter with the New York Jets. Except this is a more mature, experienced version of Smith.

"That's like light years ago. ... I'm coming into this competition with more knowledge, a lot stronger. I'm a lot more comfortable with my surroundings," Smith said. "I'm not going from a college kid to a professional and having to learn all those things. So it's a big difference. I'm older. I'm the vet in the room now versus being the rookie."

Seattle has a pretty good idea of what it has in Smith after seeing him start three games last season when Wilson was out due to a finger injury. Smith went 1-2 in those three starts with one loss in overtime and the other a 13-10 defeat to New Orleans where half of Smith's yards passing came on one throw.

Lock is the unknown for Seattle, acquired from Denver as part of the trade for Wilson. Neither knows what the tipping point is going to be for the quarterback competition but how each plays early in training camp and into the first two preseason games is likely to carry significant weight.

Lock, who was in a QB competition last year in Denver with Teddy Bridgewater, said he learned from that experience not to overanalyze every moment.

"That was really my first time ever having that happen, last year," Lock said. "I tried to compare the whole time. `Did Teddy beat me that day, or did I win that day?' And overall, if you start thinking like that, it's just not good for your mental. It's not good for your process of becoming a better quarterback. It's not about who won that day. It's about did I get better today to make the guys around me better."

Smith also briefly addressed his arrest for suspicion of driving under the influence following Seattle's final regular season game last January. The Washington State Patrol pulled him over for going 96 mph in a 60 mph zone and driving erratically across several lanes of traffic.

The King County Prosecuting Attorney's office has yet to make a charging decision in the case.