Jets' draft picks being eased in, but expect to make impacts 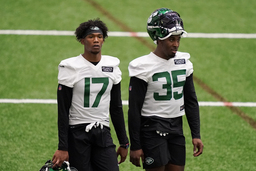 FLORHAM PARK, N.J. (AP) Robert Saleh refuses to put any pressure on any of the New York Jets' draft picks.

Now's not the time for that.

It's the start of rookie minicamp, with the Jets getting their first look at their newest players.

"I'm not expecting anything from the guys except for just stepping on the field and doing your absolute best," Saleh said Friday. "I know it's cliche, but it's the truth. Rookies and all these guys, they cook at their own rate. You know, they evolve and they become impact players at different rates all over the place."

But the expectations are most certainly different for the seven players drafted by the Jets last week - and they know that. Cornerback Ahmad "Sauce" Gardner, wide receiver Garrett Wilson, running back Breece Hall, and defensive ends Jermaine Johnson and Micheal Clemons, in particular, could all play significant roles for the franchise - immediately and for years to come.

"I just can't wait to see the impact that we have on the team," said Gardner, the No. 4 overall pick from Cincinnati.

And neither can Jets fans.

Last year's draft class was highlighted by quarterback Zach Wilson, and the focus will remain on him into the regular season. But this year's draft haul could be what helps the Jets end an 11-year playoff drought - and perhaps even this season.

Gardner was on the Jets' wish list to bolster a secondary that includes veteran D.J. Reed, with both projected as No. 1-type cornerbacks. The former Cincinnati star comes to the NFL with an impressive resume, which includes having never given up a touchdown in college. Gardner will be hard pressed to continue that streak in the pros, but he's ready for the challenge.

"I think I can have a good impact," Gardner said. "I just come in and I know I have vets there and I'm like a sponge. So I just want to soak up as much information as I can from those guys."

Garrett Wilson was the No. 10 overall pick out of Ohio State and should give his young QB a deep threat.

Hall's addition to the offense could also be a major factor because of his top-flight speed and elusiveness. The second-rounder out of Iowa State was the first running back drafted this year, and he is expected to complement Michael Carter in a versatile backfield.

"I feel like that's a type of player, I'm an impact player," Hall said. "So I feel like I could come in and if I'm doing the right things and on my P's and Q's, then I'll be able to make a big impact and help this team out a lot."

Johnson was the 26th overall pick out of Florida State, while Clemons went in the fourth round out of Texas A&M. Both are well aware of the Jets' long-running search for a consistent pass rusher. And Clemons is confident they've found some.

"I plan on making an impact, no matter what the history was," Clemons said.

The Jets also have big plans for tight end Jeremy Ruckert, a third-rounder from Ohio State who doesn't need to be the primary producer at the position after New York signed C.J. Uzomah and Tyler Conklin in free agency. Same for Max Mitchell, an offensive lineman from Louisiana-Lafayette who was taken in the fourth round as a depth piece for now.

But all seven draft picks are being eased into practices. Saleh wants them to gradually get back up to speed physically after their hectic last month leading to being selected. That approach comes from being an assistant in Jacksonville in 2015, when first-rounder Dante Fowler tore his ACL in his first practice of rookie camp.

"It wasn't worth bringing them in here and injuring them or risking injury," Saleh said of the Jets' draft picks. "Let them go off to the side, let's get a great weekend of work in for them. And it also gives us a better chance to get eyes on the tryout guys rather than the entire organization being fixated on the new draft picks."

After all, there will be plenty of time for that. And the whole franchise - and their fans - will be watching soon.