Saints add a big playmaker along with depth in NFL draft 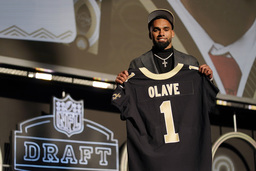 They wrapped up their first draft under new head coach Dennis Allen when they selected Appalachian State linebacker D'Marco Jackson in the fifth round and Air Force defensive tackle Jordan Jackson in the sixth round Saturday.

That came after they kicked things off Thursday by moving up five spots in the first round to select Ohio State wide receiver Chris Olave at No. 11.

In between Olave and Saturday's selections, New Orleans used its second first-rounder (No. 19) to select Northern Iowa tackle Trevor Penning, then grabbed Tennessee defensive back Alontae Taylor in the second round (No. 49) on Friday.

"We added depth and competitiveness on our team," Allen said. "We have some positions now where we don't have the sense of urgency that we have to go get a someone in free agency like we might have had a few weeks ago."

Olave fills a long-standing need at wide receiver, especially for a deep threat to complement two-time All-Pro receiver Michael Thomas, who missed all of last season because of foot surgery.

The Saints hope Olave continues a recent trend of draft choices from Ohio State that have been successful.

He's the fifth Buckeye that New Orleans has taken in the first two rounds since 2016, which is when they picked Thomas in the second round.

Cornerback Marshon Lattimore was a No. 1 in 2017 who went on to be the Defensive Rookie of the Year. Linebacker Pete Werner was drafted in the second round last season and started eight games.

Safety Vonn Bell was a second-rounder in 2016 and mostly started for four seasons before signing with Cincinnati as an unrestricted free agent two years ago.

Penning is a potential replacement for starting left tackle Terron Armstead, who signed with Miami as a free agent.

Taylor and D'Marco Jackson, who was the Sun Belt Conference Defensive Player of the Year as a fifth-year senior last season, likely will have immediate opportunities to contribute on special teams.

"Everyone knows he was the Defensive Player of the Year," Appalachian State coach Shawn Clark said, "but to me his biggest value was on special teams. You'd have to pull him off of special teams."

D'Marco Jackson, who will turn 24 before the Saints report to training camp in late July, will face a lot of competition for playing time at linebacker.

Demario Davis has been the team's leading tackler each of the last four seasons and the Saints have other linebackers they have selected in each of the past three drafts: Kaden Elliss (2019), Zach Baun (2020) and Pete Werner (2021).

Additionally, New Orleans plays more nickel defense than base defense, meaning it has just two linebackers on the field for the majority of snaps.

The Saints didn't draft a running back and haven't signed one in free agency.

But with Pro Bowl running back Alvin Kamara possibly facing a suspension with a summer court date looming as a result of his arrest for his involvement in an altercation at a Las Vegas hotel in February, depth could be a concern.

"Am I satisfied with our depth? Yes," Allen said. "Might we take a look at some we think can help us? Yes. But we might stay put. If we think someone can help us, we'll go get him."