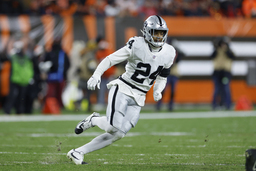 The Las Vegas Raiders are declining the fifth-year options on all three of their 2019 first-round picks as the new regime doesn't want to commit to players inherited on the roster.

General manager Dave Ziegler announced Friday that the team will let defensive end Clelin Ferrell, running back Josh Jacobs and safety Johnathan Abram play out the final year of their rookie contracts instead of extending them through 2023.

The options were worth $11.5 million for Ferrell, and about $8 million each for Jacobs and Abram.

"We look forward to working with all three players and we will evaluate each situation individually moving forward," Ziegler said in a statement.

The 2019 class was supposed to lay the foundation for a rebuilding project for the Raiders after the team acquired extra first-round picks by trading away star edge rusher Khalil Mack and receiver Amari Cooper the previous year.

While then-coach Jon Gruden and then-general manager Mike Mayock found two gems late in that draft in edge rusher Maxx Crosby and slot receiver Hunter Renfrow, the first round was mostly a flop.

Ferrell was picked fourth overall despite being projected far lower in the first round and never developed into a consistent player. While he showed some positive signs playing against the run, he struggled mightily as a pass rusher and had eight sacks in his first three seasons.

He was relegated to a backup role last season when he played less than one-quarter of the defensive snaps.

Jacobs had the most production out of the group, rushing for more than 1,000 yards in each of his first two seasons after being drafted 24th overall and making the Pro Bowl in 2020.

He was hampered by a string of nagging injuries over his career and didn't offer a lot as a receiver or as a big-play back with just five runs of at least 20 yards the past two seasons. Jacobs ran for 872 yards and nine TDs in 2021.

Abram missed almost his entire rookie season with a shoulder injury after being drafted 27th overall in 2019 and struggled in pass defense the past two years before getting hurt again late in 2021.

Abram had some bright moments playing closer to the line of scrimmage last season, but is a poor fit for new coordinator Patrick Graham's defense that relies heavily on two deep safeties.

The Raiders let 2016 first-rounder Karl Joseph leave after four seasons, traded away 2017 first-rounder Gareon Conley halfway through his third season and released 2020 first-rounders Henry Ruggs III and Damon Arnette last year over off-field issues. Ruggs was charged with felony DUI in a crash that killed a woman and Arnette threatened someone with a gun in a social media post.

Las Vegas' top pick in 2021, Alex Leatherwood, struggled as a rookie at both right tackle and guard and his future is uncertain.

The Raiders traded away their first-round pick this year for All-Pro receiver Davante Adams.