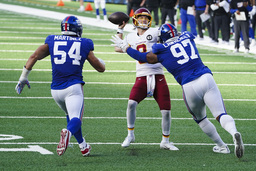 The Giants announced the move Thursday, about eight hours before the start of the NFL draft.

Lawrence was the 17th overall pick in the 2019 draft. The Clemson product has played in 48 games over his first three seasons, missing one game.

The 6-foot-4, 342-pound lineman has registered nine sacks, 14 tackles for loss, 30 quarterback hits, two forced fumbles and five pass breakups in his career. He has 135 total tackles, including 71 solo.

The move keeps Lawrence under contract with the Giants through the 2023 season. He will earn at least $10 million in 2023.

The Giants have not decided whether to pick up the fifth-year option on the contract of quarterback Daniel Jones after three inconsistent seasons.