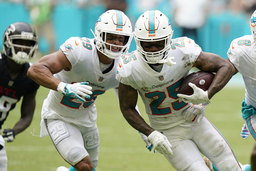 MIAMI GARDENS, Fla. (AP) The agent for Miami Dolphins cornerback Xavien Howard said Saturday that the Pro Bowler's record-setting extension with the team was the culmination of more than a year's worth of talks on the topic.

Howard and the Dolphins agreed on a five-year restructuring that includes nearly $51 million in new money. It came with about $39 million left on his existing contract, which had to be reworked last summer as well after he requested a trade.

"To be able to get the Dolphins to go against conventional wisdom and add value to a deal with four seasons remaining was unheard of itself," agent David Canter said Saturday. "That the organization allowed us to reconstruct his entire contract and add record-shattering money to the deal is beyond our imagination."

Canter said the new deal was discussed "thousands of times over hundreds of hours." The agreement was finalized Friday.