Daboll gets 2nd interview for Giants job, Quinn, his first 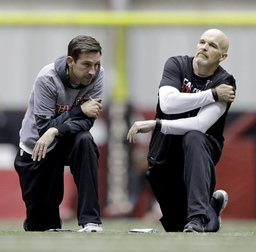 Buffalo Bills offensive coordinator Brian Daboll is getting a second interview for the vacant New York Giants head coaching job before some candidates have gotten a chance for a first meeting.

The Giants confirmed on Monday that Daboll will meet with co-owners John Mara and Steve Tisch and new general manager Joe Schoen on Tuesday at the team's headquarters in the Meadowlands sports complex.

Daboll was first interviewed on a video call on Friday, hours after Schoen, the former Bills assistant general manager, was hired to replace the retired Dave Gettleman.

The Bills have won the past two AFC East titles behind the play of quarterback Josh Allen and Daboll's high-powered offense. They have had the misfortunate to run into Patrick Mahomes and the Kansas City Chiefs the past two postseasons, dropping a 42-36 overtime decision Sunday in the divisional round. They lost the AFC title game 38-24 last season.

His unit had a great season in Dallas, posting a league-high 34 takeaways, including 26 interceptions. The Cowboys won the NFC East with a 12-5 record. Linebacker Micah Parsons led all rookies with 13 sacks, and cornerback Trevon Diggs had a league-high 11 interceptions.

Quinn led the Falcons to a Super Bowl appearance in 2016, his second season in charge. The 51-year-old was the defensive coordinator for the Seattle Seahawks in 2013 and '14, helping them win one Super Bowl and get to another.

Quinn also has been interviewed for head coach openings with the Bears, Vikings, Broncos and Dolphins.

The Giants have not made the playoffs since 2016, their only appearance since winning the Super Bowl in February 2012. The have posted five straight double-digit losing seasons. After firing Tom Coughlin at the end of the 2015 season, they have hired and fired three coaches - Ben McAdoo, Pat Shurmur and Judge. Chiefs defensive coordinator Steve Spagnuolo ran the team on an interim basis after McAdoo and then-general manager Jerry Reese were fired in December 2017.