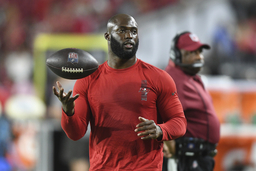 TAMPA, Fla. (AP) Tampa Bay running back Leonard Fournette has been activated from injured reserve and will play in Sunday's NFC divisional playoff game against the Los Angeles Rams.

Fournette appeared in 14 games before a hamstring injury landed him on IR on Dec. 23. His missed the final three weeks of the regular season, in addition to last week's 31-15 wild-card playoff win over the Philadelphia Eagles.

The Buccaneers announced the move Saturday, waiving veteran running back Le'Veon Bell to make room on the roster.

Fournette led the Bucs in rushing with 812 yards and eight touchdowns this season. He also had 69 receptions for 454 yards and two TDs.