Packers won't have OT Bakhtiari for playoff game with 49ers 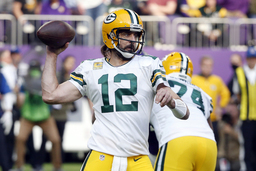 Bakhtiari, a 2020 All-Pro selection, had been listed as questionable on the Packers' injury report after playing 27 snaps in Green Bay's regular-season finale at Detroit. That had marked Bakhtiari's first game action since tearing his left anterior cruciate ligament on Dec. 31, 2020.

The Packers will have cornerback Jaire Alexander back from a shoulder injury as the 2020 second-team All-Pro selection plays for the first time since Oct. 3. Alexander is active after being listed as questionable on the injury report.

San Francisco will be missing cornerback Ambry Thomas, who had been listed as questionable with a knee injury. The Packers won't have wide receiver Marquez Valdes-Scantling, who was doubtful after leaving the regular-season finale early with a back injury.

Safeties Shawn Davis and Vernon Scott and outside linebacker Jonathan Garvin joined Bakhtiari and Valdes-Scantling as Green Bay players who are inactive.

Earlier in the week, the Packers activated wide receiver Randall Cobb (core) and outside linebackers Za'Darius Smith (back) and Whitney Mercilus (biceps) from injured reserve.

Cobb missed the Packers' last five regular-season games and Mercilus had been out for the last seven games. Smith hadn't played since the season opener.