Chiefs open up offense against Pittsburgh, eye Buffalo next 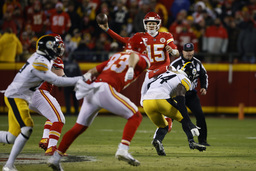 KANSAS CITY, Mo. (AP) The Kansas City Chiefs had to learn to dink and dunk their way through this entire season, contrary to every instinct of go for broke quarterback Patrick Mahomes, as opposing defenses simply refused to let themselves get beaten deep.

You can bet they relished the opportunity to open up the offense against Pittsburgh on Sunday night.

Mahomes wound up throwing for 404 yards and five touchdowns, most coming in the final three quarters, as the Chiefs turned an early seven-point deficit into a 42-21 rout. It was a vintage performance by the Kansas City offense, a throwback of sorts to the past few years, when Mahomes and his fleet of playmakers made defensive backfields look silly.

"In the playoffs, teams get a little more aggressive," Mahomes explained. "They played a little bit more single-safety-middle, especially toward the end of the second quarter, and we showed that we can always be explosive. That's who we are. We're going to make big plays happen if we get the looks, and I think over the season we've learned to be patient as well."

In truth, the Chiefs (13-5) probably didn't need quite the fireworks against the Steelers. Their defense simply shut down Ben Roethlisberger in his career finale, allowing the Chiefs to build a 35-7 lead and cruise to the finish.

They likely will need that this Sunday nigh, when they face the equally potent Bills in a rematch of last year's AFC title game.

Travis Kelce the receiver caught five passes for 108 yards and a score. Kelce the quarterback threw a 2-yard TD pass to Bryon Pringle. In doing so, Kelce the tight end became the first NFL player to throw a touchdown pass, catch a touchdown pass and have at least 100 yards receiving in a single playoff game.

"I don't think I have ever had the (courage) to tell coach (Andy) Reid that I was a high school all-league player," said Kelce, who also played a bit of quarterback in college. "That really doesn't mean much at this level. He knew that I could throw the ball since the first day I got there. It just took me a while to get a completion."

Despite the offensive output, the Chiefs actually punted on their first three possessions Sunday night. Not exactly well, either. Tommy Townsend averaged just 34.5 yards with a long of 41 for the game.

Clyde Edwards-Helaire missed another game with a shoulder injury and backup Darrel Williams was dealing with a sore toe. So the start went to Jerick McKinnon, who had perhaps the best game by a Kansas City running back this season. McKinnon ran 12 times for 61 yards and caught six passes for 81 yards and a touchdown.

"Every day you have something to prove in this league," he said. "I just wanted to prove to my teammates and my coaches that I can get the job done. My teammates allowed me to do that."

The Chiefs had high hopes for Josh Gordon when they signed the former All-Pro wide receiver as a reclamation project early in the season. He wasn't even active on Sunday as the Chiefs went with journeyman Daurice Fountain instead.

Edwards-Helaire tried to return against Pittsburgh but only managed to practice once last week. CB Rashad Fenton also was inactive on Sunday after he complained of a shoulder injury during pregame warmups.

5 - The Chiefs have won five consecutive playoff games at Arrowhead Stadium, including the last two AFC title games, the longest streak in franchise history. One more win would move the Chiefs into a tie with the Broncos for the 10th-best streak since the 1970 merger. Five consecutive games are also the longest active streak in the NFL.

The Chiefs beat the Bills 38-24 in last year's AFC title game, but these are two very different teams. Josh Allen shredded the Chiefs for three touchdowns passing and two rushing when Buffalo rolled past Kansas City in October.