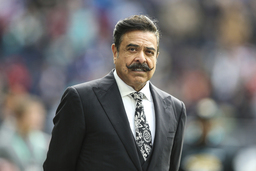 JACKSONVILLE, Fla. (AP) If a 40-point drubbing at New England didn't get Jacksonville owner Shad Khan's full attention, then what's being planned for the team's season finale just might.

Frustrated fans are revolting against the Jaguars and have Khan in their crosshairs.

Hundreds, if not thousands, have changed their social media profile pics to a clown donning Khan's signature mustache. And they've started replying to every Jaguars post or live feed with countless clown emojis. Next up: They're planning to don clown costumes - red rubber noses, face paint and colorful wigs, at the very least - when the Jaguars (2-14) host Indianapolis (9-7) at TIAA Bank Field on Sunday.

The goal is to persuade Khan to fire general manager Trent Baalke, whose reputation and repeated mistakes have been under the microscope since NFL Network reported that Baalke would be retained in 2022 and would assist in the team's coaching search.

Baalke's resume includes three consecutive NFC championship games with San Francisco (2011-13) and reports he was a problem behind the scenes while working with ex-NFL coaches Jim Harbaugh (2011-14), Jim Tomsula (2015), Chip Kelly (2016) and, most recently, Urban Meyer (2021).

Baalke inherited a Jaguars team that had the No. 1 draft pick (quarterback Trevor Lawrence), five of the first 65 selections and about $100 million in salary cap space. And he somehow made Jacksonville worse and arguably a bigger laughingstock than it's been during Khan's decade of dysfunction as owner.

Khan fired Meyer on Dec. 16. In the three games since, the Jaguars have been outplayed by equally woeful Houston and the New York Jets and then thoroughly embarrassed in a 50-10 loss at the Patriots on Sunday.

It was just four years ago Jacksonville and New England met in the AFC title game, with the Patriots eking out a 24-20 victory after trailing by 10 in the fourth quarter. The Jaguars are 14-50 since and have parted with nearly every starter from that team. The Pats are 40-25 over the same span, with two Super Bowl appearances and are now returning to the playoffs for a third time.

"I haven't been around the NFL long so I really still don't even know how everything completely works, but I'm just trusting who is in leadership positions," Lawrence said. "At the end of the day, my job is to be a quarterback and to lead this team, and I can only do so much, and that's what I'm going to do.

"Other than that, I'm just going to put my head down, go to work, and I have faith that we are going to come out in a way better spot next year than we are right now. I 100% believe that, and I'm just looking forward to doing that because a lot of these guys deserve it."

The Jaguars have lost eight consecutive games and will end the season with a 17-game skid on the road and a 16-game slide against NFC opponents. They have dropped 10 straight against AFC South foes, a streak that could reach 11 with a loss to the Colts - and with potentially thousands of clown-clad fans in the stands.

The Jaguars are closing in on the No. 1 pick for the second straight season. It was celebrated last season, with Jacksonville positioning itself to land a generational quarterback. There's not nearly the buzz this time around, with pass rushers Aidan Hutchinson (Michigan) and Kayvon Thibodeaux (Oregon) considered the top prospects.

Lawrence's ball security has become an issue again. The rookie has eight turnovers in his last four games, looking so out of sync Sunday that interim coach Darrell Bevell considered pulling him in the fourth quarter.

Laquon Treadwell has at least four receptions in six straight games, making a case to return next season. A first-round pick by Minnesota in 2016, Treadwell has 30 catches for a career-high 410 yards.

Whatever chances Jacksonville's assistants coaches had of returning next season seem to be dwindling.

Tight end James O'Shaughnessy (hip) is expected to return for the finale.

6 - number of consecutive wins - yes, wins - the Jags have at home against Indianapolis. The Colts last won in Jacksonville in 2014.

Finding the right coach and general manager combination who can help Jacksonville end its losing ways.