Lions reeling after chaotic finish leaves them at 0-10-1 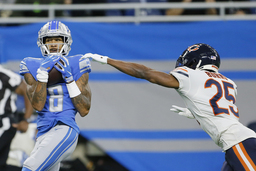 DETROIT (AP) The Detroit Lions, for all the mistakes they had made Thursday against the Chicago Bears, still had one chance to pick up their first win of the season.

Detroit led 14-13, but the Bears had driven to the Lions 16 with 1:54 to play. It was third-and-9, so coach Dan Campbell called a timeout to give his team its best chance. Get a stop - hopefully on an incomplete pass - and after Chicago's chip-shot field goal, get the ball back with 1:45 to play and two timeouts.

Given Detroit's pop-gun offense, it wasn't an ideal strategy, but it had a chance. Defensive coordinator Aaron Glenn gave linebacker Alex Anzalone the play call, and the Lions lined up for one of their biggest plays of the season.

These Lions don't make the big plays. Half the defense was in one formation and the other half was in a different one. The call had two options depending on how Chicago lined up, and several players read it the wrong way.

"There were a couple of substitution errors and some miscommunication," Lions cornerback Amani Oruwariye said. "We can't have that; especially given the season we're having. We have to eliminate errors and we have to communicate."

On the sideline, seeing the chaos unfolding and knowing the Bears were about to score a touchdown against their baffled defense, Campbell and Glenn desperately tried to call a second timeout. They both knew that was illegal and would result in a 5-yard penalty for defensive delay of game and a lost timeout. But they didn't think they had a choice.

The players understood the timeout; Anzalone agreed the Bears would have likely scored against the "void" caused by the misunderstanding. But they didn't know about the penalty.

"I knew in basketball, you get a technical foul, but that's all I knew," Anzalone said. "I guess it's a rule here, too."

The Lions still could have gotten off the field on third-and-4, but Will Harris, a safety converted to nickel back in Detroit's injury-ravaged secondary, was playing nearly 10 yards off wide receiver Damiere Byrd.

Byrd was wide open for a 7-yard gain and the Bears ran the clock down to 1 second before Cairo Santos hit a 28-yard field goal to win the game.

The offense quickly absolved the defense of any blame. After all, Detroit hasn't allowed an opponent to reach 17 points in the last three games. It was the offense that wrecked two drives by committing three straight penalties and ending up facing third-and-32.

"We can't keep shooting ourselves in the foot like that," tackle Taylor Decker said. "The defense is flying all over the place. We have to do our part."

Before the Week 9 bye, Detroit's pass defense was giving 9.3 yards per passing attempt and had allowed 15 touchdown passes while only picking off four passes. Since the break, quarterbacks are down to 6.2 yards per attempt and have thrown four interceptions with three touchdowns.

Campbell started the season with aggressive play calling, but now seems to be more focused on avoiding the "disasters" that plagued the offense early in the season.

None of those plays worked.

Josh Reynolds, who played with Jared Goff for the last four seasons in Los Angeles, caught three passes for 70 yards, including a 39-yard touchdown. He could give the Lions a second downfield threat to go along with tight end T.J. Hockenson.

Detroit's other wide receivers caught seven passes for 40 yards, 34 of which came after the catch. On one series, the Lions needed three passes to gain a first down.

RB D'Andre Swift left in the first half with a shoulder sprain.

6 - number of chances left for the Lions to get a win and avoid becoming the first franchise with two 16-losses seasons.

Find a way to win a football game. Detroit hosts Minnesota on Dec. 5.