Bears have no QB regrets despite Andy Dalton's effectiveness 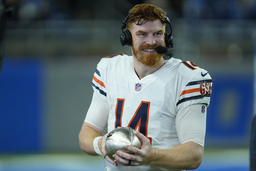 LAKE FOREST, Ill. (AP) The quarterback path taken by the Chicago Bears this season has not quite been one coach Matt Nagy anticipated in preseason.

After the effective performance given by veteran Andy Dalton in the last two games, the Bears believe they at least have a viable standby as starter Justin Fields sits because of a painful rib injury - and there is no QB budding controversy.

Nagy on Friday described Fields' injury for the first time.

"I can confirm him having cracked ribs," Nagy said. "But at the same point in time, he's moving around pretty good."

So Fields' availability to face Arizona when the Bears play again Dec. 5 is unknown.

"There hasn't been throwing," Nagy said. "But that's stuff that, you've got to be careful with that right away when it happens."

Although Nagy offered no timeline on the rookie's return, Dalton was able to lead the Bears to late go-ahead scoring drives in successive games, and to Thursday's 16-14 win over the Detroit Lions to snap a five-game losing streak.

Dalton has been good enough to at least give Nagy pause to wonder if the right decision was made to make Fields the starter four weeks into the season. However, he has no regrets and he also denied a report saying Fields only became the official starter because team owner George McCaskey ordered it.

"You know, there's been some false stuff out there, that couldn't be ... furthest from the truth, you know what I mean?" Nagy said.

Dalton originally was the Bears' starter until suffering a knee injury. Since relieving Fields, he has gone 35 of 62 for 518 yards with a passer rating of 93.3. He has thrown three touchdown passes to one interception in those two games.

"When you have a plan and you know what that plan is and you go with it, and here we are where Andy got hurt and Justin comes in," Nagy said. "Justin's the starter, Justin gets hurt. When Justin gets back to being healthy, he's back in. And when you have that plan, you stick to it and you don't look back."

It doesn't matter now to Nagy that Fields' passer rating of 69.0 had been far below what Dalton showed in the last two games or the Bears passing attack is showing signs of consistency it previously lacked.

"Justin is really growing and getting better and I think we all saw that, he's having great moments," Nagy said. "Are there places that he can get better and we can help him get better? For sure, that's a rookie year, that happens, that's a part of developing a rookie quarterback, you know what I mean?"

The passing attack. This seems unlikely considering the Bears have been last in passing since Week 3. However, Dalton threw for a Bears season-high 317 yards on Thursday at 7.8 yards per pass attempt. And the Bears did that without injured wide receiver Allen Robinson (hamstring) and with third wide receiver Marquise Goodwin leaving in the third quarter with a foot injury.

The running attack. Facing Detroit's 31st-ranked run defense in the league, the run blocking wasn't there for the Bears. They were able to average only 2.3 yards a carry and gain 68 yards on 29 attempts. Dalton had 11 of those yards scrambling.

Damiere Byrd. After making 47 receptions for New England last year, the veteran receiver had only five catches this season heading into Thursday's game. But he caught four passes for 42 yards, including a key first-down pass that let the Bears run the clock down to 1 second left before kicking the winner.

"He does everything you ask," Nagy said. "He stays in his lane. He's somebody that we trust immensely."

18 - The final Bears drive was 18 plays to run out the clock. It was the most plays to any drive the team has had with Nagy as coach.

The Bears have the weekend off and then host Arizona on Dec. 5.