Seahawks saying all the right things despite losing ways 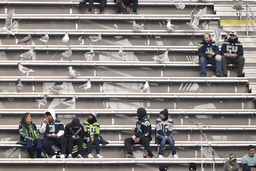 RENTON, Wash. (AP) Only once in his career has Bobby Wagner lost seven games in a regular season. It came in 2017 when the Seattle Seahawks finished 9-7 and missed the playoffs for the only time in his career.

It's not even December and the Seahawks already have seven losses, creating a strange situation for a team that's become so accustomed to success.

It's also why Wagner was among the veterans who spoke in a team meeting earlier this week with the message to the younger players of not giving up on the season despite Seattle's 3-7 record.

"When you're in a situation like this people are going to look at your leaders, and so if your leaders don't believe then what's the point in a team believing?" Wagner said. "I think it was just important to express the confidence that we have, the belief that we have.

"We've had some crazy stuff happen over my years in the league, and the only way that happens it starts with your mind, starts with what you believe in and what you put your energy into."

There would need to be some craziness happening for Seattle to get back into contention in the NFC. Seattle has lost two straight and five of six overall, and its 3-7 record is its worst through 10 games since 2009.

The 2017 season when Seattle missed the postseason at 9-7 is the worst record for a team quarterbacked by Russell Wilson with the Seahawks. And while he missed three-plus games this season due to a finger injury and surgery, Seattle would need to run the table to avoid posting a worse mark.

"I feel like when you watch these games and you watch some of the games that we let slip away, a lot of it has come down to us getting in our way," Wagner said. "Whether it has been dumb penalties, whether it's been mistakes that we've made, I feel like there is time to right those wrongs."

Wagner has a point. The Seahawks have been competitive in nearly every one of their losses, their most lopsided defeat 17-0 at Green Bay two weeks ago. That doesn't mean they've played well in all those circumstances. Missed assignments, turnovers, poor execution have all led to deserved defeats.

Last year, Seattle was 8-3 in games decided by eight points or less. This year, the Seahawks are 1-3.

"Most of these games that we've lost, we weren't getting our (butts) kicked. They were close games," Seattle safety Ryan Neal said. "You look at the film, this team still is a dog-fighting team. I mean, you can't ignore that. It's not like we're going out there and laying on our back."

But the struggles have only amplified the conversation about whether there are major changes that need to be made for Seattle to return to the status it has held for most of coach Pete Carroll's tenure.

Talk radio has been filled with questions whether Carroll's stint should come to an end, or if it's time to trade Wilson and start on a rebuild. For his part, Carroll said none of that big-picture stuff matters to him in the present, and it's why he's trying so hard to keep his team focused on Monday's matchup at Washington.

"This time of year in any season I'm not thinking about whatever down the road, in the future, any of that kind of stuff. That's not what is in my mind at all," Carroll said. "It's really just the next day that we have and the opportunity that we have in that game, that weekend. I'm trying to live that so that I can demonstrate that for our guys, and be a good example and illustration for that."