Dolphins trade one attitude for another, and are 3-0 since 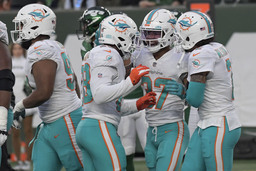 MIAMI GARDENS, Fla. (AP) It may be a coincidence. It may be that the schedule got a little bit easier as the Miami Dolphins were getting a little bit healthier. Or perhaps the law of averages dictated that a few breaks had to start going their way.

Turns out, everything changed at the trade deadline for the Dolphins after all.

Instead of swinging a deal for embattled Houston quarterback Deshaun Watson or shedding big names to acquire assets for the future, the Dolphins traded an old attitude for a new one. They were 1-7 that week, when coach Brian Flores told the team it was going to play a different way.

The Dolphins are 3-0 since.

"We all knew something had to change," cornerback Elijah Campbell said.

Much has. They're still 13th in the AFC and a 4-7 record is nothing to schedule a parade about, but a three-game winning streak has provided hope.

Flores tipped his hand with the "we can get into other things" line. He doesn't share state secrets. He rarely divulges what happens in team meetings. He doesn't want credit when things go well, though is first in line to accept blame when things go poorly.

But what he said in that team meeting, whether he likes that it's known or not, changed the trajectory.

Here are the NFL's three stingiest teams in terms of points allowed in November - New England is giving up 4.3 per game during that stretch, Kansas City is allowing 11.8 per game and the Dolphins are yielding 12 per game. Not coincidentally, the Patriots and Chiefs are the only teams in the NFL with longer active winning streaks right now than Miami.

"When we all come together and are communicating, just everybody on the same page, it's a great thing," Dolphins defensive tackle Raekwon Davis said. "We're all just on the same page."

To be fair, this three-game winning streak by the Dolphins hasn't exactly come against a trio of NFL heavy-hitters. Baltimore (a 22-10 Miami win ) probably is going to the playoffs; Houston ( a 17-9 Dolphins win ) and the New York Jets ( a 24-17 Dolphins win on Sunday ) do not seem like postseason contenders.

That said, the improvement is notable.

The Dolphins are giving up 0.97 points per opponent possession this month, second best in the NFL behind only New England's ridiculous 0.42. In September and October, Miami was giving up an average of 2.66 points every time the opponent touched the football. Put another way, teams are scoring on 22% of their possessions against Miami this month, as opposed to scoring on 49% of their possessions in the first two months of the season.

And it's not just all on the defense, either. The offense is hitting on big plays - three of them for more than 50 yards this month, after none in September and October. The Dolphins aren't scoring a ton, just averaging 21 points in this winning streak, but it's been more than enough to get wins.

"I think it's just truly a series of things: good preparation in meetings, in walkthrough, in practice, execution in practice," Flores said. "That gives you a chance to execute in the game. We're seeing some of that."

By any measure, that's a good trade.

QB Tua Tagovailoa. He's healthy, he didn't lose his job at the trade deadline and has been laser-sharp since getting back on the field following Jacoby Brissett's injury midway through the Baltimore game. Tagovailoa has completed 76% of his passes in that span and his rating in the past two games (110.0) mirrors Green Bay's Aaron Rodgers (110.2).

RB Myles Gaskin. His 89 rushing yards against the Jets were a season high for any Dolphins' ball carrier. Gaskin has the four best rushing games for Miami this season (89 Sunday, 67 vs. Atlanta, 65 vs. Las Vegas, 49 vs. New England).

Even though one of the calls was declined, the Dolphins were flagged three times for offensive pass interference Sunday. "Got to make an adjustment," Flores said.

The Dolphins might get wide receivers DeVante Parker and Will Fuller back from stints on injured reserve this week, though Flores said there's been no definitive decision on their availability yet.

The Dolphins won't leave home now until after Christmas. They play host to Cam Newton and the Carolina Panthers on Sunday to start a three-game homestand that also includes a bye week.