Saints' week off comes as slew of key players near return 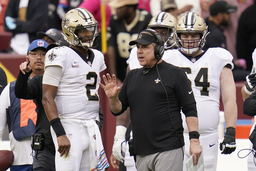 NEW ORLEANS (AP) Beyond the New Orleans Saints' quarterback transition from Drew Brees to Jameis Winston, and the club's month-long displacement by Hurricane Ida, there has been the challenge of having half-dozen or more prominent players unavailable because of injury or suspension.

The Saints (3-2) still managed to take a winning record into this week's bye, and are hoping to welcome a handful of players back to action when they return to the field.

Left tackle Terron Armstead has missed two games since his Week 3 elbow injury; running back Tony Jones Jr., a regular in the backfield behind Alvin Kamara, went out with an ankle injury early in a Week 4 loss to the New York Giants.

And during last weekend's game at Washington, two more key players went down. Return specialist and receiver Deonte Harris injured his hamstring and reserve QB Taysom Hill, who also plays tight end, had to be carted to the locker room after a heavy and penalized hit to the head while he was trying to catch a pass.

After those latest injuries, the Saints were nonetheless able to pull away from Washington for a 33-22 victory.

In a decade-and-a-half as a head coach in New Orleans, Sean Payton said he has learned a few things about how best to try to remain competitive when so many prominent starters or regulars are down at once.

"The first thing is attitude," Payton said. "I just I hate being around, you know, this idea of: Well, we're (short-handed), you know, with the excuse already built in. That can be extremely contagious in a negative way.

"Then your job then is to look at who you have, and then try to put them in the best positions to be successful," Payton continued. "I mean, I just think that's what we're paid to do. And in this league, there's no utopia. There's no, everyone is healthy this week. It is just ever-changing and you hope your number (of injuries) is at the right time reduced rather than increased."

And then there's the hard work of preparing the roster - including the practice squad - for the eventuality of injuries at key. While fans may be fixated on players available in a given week for their fantasy teams and leagues, Payton said he and his staff cannot afford to neglect players who won't likely be in the game plan in the current week, but could be down the line.

"It seems like a cliche, but, man, they're all of these guys, the (reserves) that are on the active roster, the guys that may be on a practice squad," Payton began. "They have to be ready to play and if they're not progressing where you don't have a vision, then you need to turn that part of the roster and keep looking for guys that you feel like can help you if the time comes."

One example would be offensive lineman Calvin Throckmorton, a practice squad player last year who has been thrust into a starting role at right guard since McCoy went down and Cesar Ruiz moved from guard to center.

Now, having proven themselves competitive despite being short-handed, the Saints are eagerly anticipating the return of a number of key players shortly after the bye.

Thomas, who in 2019 set an NFL record with 149 catches in a season, will be eligible to come off the physically unable to perform list next week. Onyemata's six-game suspension for violating league rules on performance-enhancing drugs ends the week after. More injured players could be available by the time the Saints visit Seattle for a Monday night game on Oct. 25.

"There are certainly some positives about the bye happening when it's happening," linebacker Demario Davis said. "It gives another week for a lot of our guys to get healthy. We've got some very big pieces supposed to be coming back after the bye and so certainly excited about that."