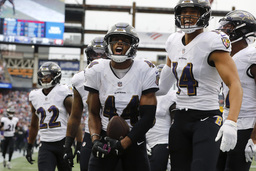 FOXBOROUGH, Mass. (AP) Lamar Jackson has spent his career doing things nobody in the NFL has ever done.

The Ravens quarterback added another outstanding performance with his arm and his legs on Sunday.

Jackson threw four touchdown passes and ran for another score to help Baltimore (2-1) hold off the New England Patriots 37-26. He became the first player in the Super Bowl era with three or more passing touchdowns and 100-plus rushing yards in consecutive games.

The Patriots, meanwhile, lost quarterback Mac Jones late in the game to a leg injury that appears serious.

A week after Jackson's four-touchdown performance wasn't enough to stop a furious late charge by Miami, this time he got help from his defense, which forced turnovers on three straight fourth-quarter drives by the Patriots (1-2).

"No one has to tell me about Lamar Jackson," Ravens coach John Harbaugh said. "I believed in him from the first day we drafted him."

Baltimore led 14-13 at halftime, and Jackson said his mindset was to keep the pressure on.

"We've got to score, too," he said. "Last week when Miami started scoring and they went on that run I think we put up three points. I wasn't having it. None of us on offense was having that this game."

Justin Tucker added a 56-yard field goal, the 50th of his career from 50 yards or more, as the Ravens won at New England in the regular season for the first time in seven tries.

The Patriots suddenly have questions at quarterback after Jones was hurt with less than two minutes to play. He hopped off the field and headed straight to the locker room, grimacing in pain as two members of the training staff helped him.

Jones completed 22 of 32 passes for 321 yards but threw three interceptions. Coach Bill Belichick provided no detail about the injury.

Despite being under pressure for most of the day and losing another offensive lineman to an early injury, Jackson completed 18 of 29 passes for 218 yards with an interception. He rushed for 107 yards on 11 carries.

DeVante Parker had five catches for 156 yards for New England.

Jones had three of the Patriots' four turnovers on the day. The other was a late fumble by Nelson Agholor.

"You're not going to win turning the ball over the fourth quarter," Belichick said.

The Patriots trimmed the gap to 31-26 on a 1-yard TD run by Rhamondre Stevenson, but failed on a 2-point conversion try.

New England got the ball back when Rashod Bateman caught a 24-yard pass, then fumbled.

The Patriots took it down to the Ravens 10, but Jones' pass into the end zone overshot Parker and was intercepted by Marlon Humphrey.

A quick three-and-out gave the Patriots the ball back. But a 30-yard pass from Jones to Agholor ended with strip from behind by Kyle Hamilton and recovery by Marcus Peters along the sideline.

Baltimore's offense was effective despite having to go deep into its roster because of injuries.

Left tackle Ronnie Stanley remained inactive as he continues to work his way back from the ankle issue that kept him sidelined for most of last season.

The Ravens then lost tackle Patrick Mekari on their first series to a left ankle injury, forcing them to go with fourth-stringer Daniel Faalele to protect Jackson's blind side.

The Patriots sacked Jackson four times in the first half - three by Deatrich Wise. Jackson was also intercepted early in the second quarter by Jonathan Jones, which New England turned into points when Jones scored on a 3-yard run.

"One sack happened. And then after that (Faalele) started dominating, just like in college," Jackson said. "They were all dialed in."

Nick Folk made a 35-yard field goal in the second quarter that was his 57th in a row from inside 50 yards - an NFL record.

Folk hasn't missed from inside 50 since the 2020 season opener against Miami.

The kick cut the Baltimore lead to 7-3 and broke the record that Ryan Succop set with Tennessee from 2014-17. Folk added a 50-yard field goal on the final play of the first half.

Patriots: DE Lawrence Guy left with a shoulder injury in the third quarter.

Patriots: On the road for the third time in four games when they visit Green Bay next Sunday.