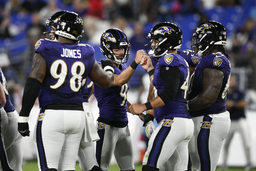 BALTIMORE (AP) Tyler Huntley went 16 of 18 for 110 yards and a touchdown in the first half, and the Baltimore Ravens extended their record streak of preseason victories to 21 with a 23-10 win over the Tennessee Titans on Thursday night.

Rookie quarterback Malik Willis ran for a touchdown for the Titans, but Huntley put Baltimore ahead to stay with a 14-yard scoring strike to Shemar Bridges in the final minute of the second quarter.

Bridges, an undrafted rookie out of Fort Valley State, had four catches for 62 yards.

"I like Shemar," Ravens coach John Harbaugh said. "He's a big, physical guy. He goes up and gets the ball, he posts a lot of good speeds in practice, he plays hard on special teams in practice."

Lamar Jackson and Derrick Henry were among the standouts who didn't play Thursday. Huntley was Jackson's top backup last season and made four starts. He was sharp in this preseason opener, although his completions were mostly short ones.

"Tyler played great. His numbers were off the charts," Harbaugh said. "He really ran the offense well. Timing was really good in the passing game. I thought the o-line looked pretty good."

Willis, a third-round draft pick from Liberty, started the game for the Titans with Ryan Tannehill held out. Willis scored on a nifty 7-yard run in the second quarter, spinning back toward the Tennessee sideline and then slipping past a couple Baltimore defenders near the goal line.

"He needs to try to throw the ball when guys are open, be more decisive," coach Mike Vrabel said. "Wanted to get him out there and wanted to see how he responded. He did OK."

Safety Kyle Hamilton, a first-round pick this year by the Ravens, recovered a fumble by Julius Chestnut at the Tennessee 22. Baltimore converted that short field, taking a 7-0 lead on a 4-yard touchdown run by Mike Davis.

The Titans led 10-7 before Huntley guided a 10-play, 58-yard touchdown drive near the end of the half. Then Justin Tucker added three field goals in the second half.

Logan Woodside took over at quarterback for Tennessee in the third quarter and was intercepted twice, including one underthrown pass that Daryl Worley picked off at the Baltimore 2.

Anthony Brown relieved Huntley and went 10 of 15 for 117 yards for the Ravens. Brett Hundley also played a bit toward the end.

Tight end Isaiah Likely, another Baltimore rookie, had four catches for 44 yards, although he also had a couple holding penalties.

"I probably had a jitter or two pregame, because you look around, and the stadium fits around 70,000?" Likely said. "You've just got to look around and really smile, get a jitter out, and then you got to realize it's football."

The Titans replaced Willis with Woodside in the middle of Tennessee's first offensive drive of the second half - immediately after Willis gained 17 yards on a scramble.

"I wanted Malik to throw the ball," Vrabel said. "And he wasn't."

The crowd in Baltimore observed a moment of silence before the game in honor of linebacker Jaylon Ferguson and former defensive lineman Tony Siragusa, both of whom died in June.