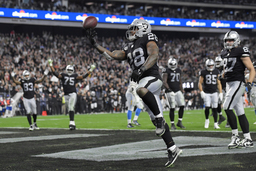 LAS VEGAS (AP) It seemed only fitting the Las Vegas Raiders needed every second of an overtime game to earn their first playoff berth since 2016, a microcosm of their roller coaster season.

And as they've done five other times this season, the Raiders won on the final play of the game.

Daniel Carlson's 47-yard field goal as time expired in overtime lifted Las Vegas past the Los Angeles Chargers 35-32 on Sunday night and into the postseason.

And in the process, eliminated its AFC West rivals, while helping Pittsburgh advance.

"We've had ups and downs all season but we have guys who love football," Raiders defensive end Maxx Crosby said. "We have dudes with heart."

Las Vegas survived Los Angeles' late-game comeback built on a series of fourth-down conversions to force overtime. The Chargers tied it with a 12-yard TD pass from Justin Herbert to Mike Williams as time expired in regulation.

Each team made overtime field goals before Carlson's game-winner. Carlson, three times the AFC special teams player of the week this season, kicked five field goals in the game.

The Raiders won a fourth straight game and completed an incredible late-season run after losing five of their previous six.

"We just found a way to have a chance to win at the end," Raiders interim coach Rich Bisaccia said. "We've been in this situation before ... just can't say enough about how this team prepares and going into the game and playing like that. They believe in each other when they go out there. They don't blink."

Derek Carr completed 20 of 36 pass attempts for 186 yards, including two touchdowns. Hunter Renfrow hauled in two touchdown passes, while a visibly injured Josh Jacobs ran for a career-high 132 yards on 26 carries, including one score.

"You feel it when you breathe, I get winded and I feel it," said Jacobs, about playing with a rib injury. "It was just one of them (games) I was constantly talking to myself each play, getting helped up off the ground. I was talking to myself, like `it's this much time on the clock, this is what we need.' I would have felt like I let my team down if I went out there and let the pain get to me and gave up."

The Raiders, who had arguably more offseason and in-season distractions than any team, overcame multiple adversities and return to the playoffs for only the second time since losing to Tampa Bay in the 2003 Super Bowl.

"It's probably the coolest accomplishment I think I've ever had in my life football-wise."

Had the teams tied, the Steelers would have been eliminated. Instead, Las Vegas goes to Cincinnati on Saturday to open the wild-card round, and Pittsburgh plays at Kansas City on Sunday night.

Trailing by 15 in the fourth quarter, the Chargers scored two late touchdowns, with a 19-play, 83-yard drive capped by Herbert's strike to Williams. Dustin Hopkins' extra point sent the game into the extra period. Los Angeles converted on three fourth-down plays in the lengthy drive.

Herbert, who was under duress much of the night, completed 34 of his 64 attempts for 383 yards with three touchdowns and one interception.

"I'm disappointed because I feel like we're one of the best teams in the NFL," Chargers coach Brandon Staley said. "I feel like this team's good enough to not only be in the tournament, but to win it."

Carr's tally gave him 4,804 yards this season, more than any other Raider in franchise history. Rich Gannon threw for 4,689 yards in 2002. Carr has thrown for more than 4,000 yards in four of his eight seasons with the Raiders.

Heading into the game, the Chargers had forced 10 turnovers in their previous six games. The Raiders, meanwhile, had committed 12 turnovers over the last four games. But Las Vegas' defense turned in one interception - by former Charger Casey Hayward Jr. - and one fumble recovery, while its offense committed none.

Raiders: Travel to Cincinnati for the first round of the AFC playoffs.