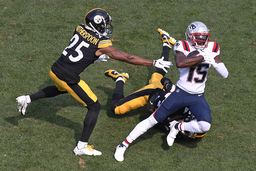 PITTSBURGH (AP) The New England Patriots don't panic. It doesn't matter the year, the opponent or even the quarterback.

A sometimes lifeless loss to Miami in their opener was just that, an opener. A starting point the Patriots knew would in no way define their season.

The response was a performance that's become the standard for an organization that worries far less about style points and far more about winning by any means necessary: a clinical, largely selfless 17-14 victory over Pittsburgh on Sunday that kept New England without an 0-2 start in over 20 years.

One big throw from quarterback Mac Jones to Nelson Agholor right before halftime. A muffed punt that found its way into the hands of Brenden Schooler to set up a pivotal touchdown run by Damien Harris. A leaping pass deflection by linebacker Matthew Judon in the fourth quarter, all of it topped off by 6:33 of pure physical domination by an offensive line that let the Patriots drain the clock on their way to beating the Steelers for the 13th time in 17 meetings under coach Bill Belichick.

"We're building an identity," said longtime Patriots defensive back Devin McCourty. "To come to Pittsburgh and gut out a win, you start to build who you are."

An identity that may, in the end, turn out to be much the same as so many New England teams that came before it.

Jones bounced back from a rough Week 1 performance to throw for 253 yards, including a 44-yard heave to a leaping Agholor that gave the Patriots a 10-3 lead at the break. The defense forced a pair of three-and-outs in the fourth quarter after the Steelers had drawn within three. And the special teams took advantage of a miscue by Pittsburgh punt returner Gunner Olszewski, whose muff helped New England celebrate owner Robert Kraft's 500th game like it has so many that came before it: with a win built not so much on style, but substance.

"I hope this game is a stepping stone toward where we're headed," Agholor said. "At the same time, I don't want it to be, `Hey, this is our identity.' It's more `OK, we see some good stuff. Now let's get better.'"

Harris ran for 71 yards, most of them coming on a clock-chewing drive in the final minutes that let New England play keep away as Pittsburgh's defense sagged late without star outside linebacker T.J. Watt, who is out indefinitely with a left pectoral injury.

Mitch Trubisky threw for 168 yards with a touchdown and an interception for the Steelers, whose offense sputtered for long stretches as it struggled to find any sense of rhythm.

Trubisky hit Pat Freiermuth for a 7-yard touchdown on the first play of the fourth quarter to draw the Steelers within three and briefly quiet the chants for rookie backup quarterback Kenny Pickett.

Those cheers don't figure to go away anytime soon, however, after the Steelers failed to pick up a single first down during their final two possession while squandering a chance to tie or take the lead.

"We need that spark," said Steelers wide receiver Diontae Johnson. "We have to bring that spark each and every week. We're going to be fine. We have to come off the ball with a purpose and we'll be good."

Good may be a few steps down the road. The Steelers finished with just 243 yards of total offense as the Patriots made it a point to take away the deep passing game. A mixture of a steady pass rush in Trubisky's face and some hesitancy by Trubisky to test the New England secondary led to a series of check downs that moved the sticks on occasion but failed to create any sustained momentum.

The first meeting between two of the NFL's marquee franchises to feature neither Tom Brady nor Ben Roethlisberger in years lacked the high stakes that long defined the rivalry between former AFC superpowers.

Instead, New England came in looking for a jolt following a blah Week 1 loss to Miami while the Steelers are still in the nascent stages of the post-Roethlisberger era, a journey that began with a thrilling and slightly bizarre victory over Cincinnati last Sunday.

The overtime victory came at quite a cost. Without Watt, Pittsburgh failed to generate any sort of sustained pass rush against Jones. The Steelers failed to record a single sack after collecting seven against the Bengals, and while Jones wasn't spectacular, he didn't have to be while extending drives with responsible and safe throws over the middle.