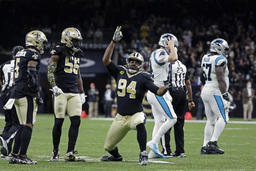 NEW ORLEANS (AP) Cameron Jordan bolted into the backfield from the left edge of Carolina's offensive line. The Saints defensive end wrapped both arms around Sam Darnold, lifted the Panthers' quarterback off his feet and pulled him to the turf on his side as if they were on a wrestling mat.

That was one of 3 1/2 sacks for Jordan, who led a menacing, seven-sack performance by New Orleans' defense in a crucial 18-10 Saints victory over the reeling Panthers on Sunday that kept the Saints in the hunt for a playoff spot.

"It's a full-blown push from the entire D-line," Jordan said. "We're a force to be reckoned with. ... When we take over the game, there's not much anybody can do."

The way Jordan and Co. were playing, the Saints might have won for the second time in three games without even scoring a touchdown. But after Brett Maher kicked four field goals to give them a 12-10 lead, Alvin Kamara capped the scoring by turning a short pass into New Orleans' first touchdown in more than 11 quarters.

The third victory in four games for the Saints (8-8) - also just their second triumph in seven games played in the Superdome this season - assured New Orleans would head into the final week of the regular season with a chance to cap an adversity-filled season with a postseason berth.

Taysom Hill completed 17 of 28 passes for 222 yards. He also led the Saints in rushing with 45 yards while playing behind an offensive line missing four season-opening starters. Marquez Callaway caught six passes for 97 yards and Kamara had five catches for 68 yards, including his 12-yard TD in the fourth quarter.

C.J. Gardner Johnson squelched Carolina's last chance to drive for a tying score with his interception in the final minute, dooming the Panthers (5-11) to a sixth straight loss.

Darnold regained his starting job this week after Cam Newton had started in Carolina's previous five losses. Darnold completed 17 of 26 passes for 132 yards - a significant drop-off from his winning outing against the Saints in Week 2.

"In the end their (defensive) front won the game for them; we weren't able to get them blocked," said Panthers coach Matt Rhule, who has come under increasing scrutiny as Carolina has lost 11 of 13 games. "It's the same story we've had when we haven't played well offensively. When Sam had protection, he was able to complete balls and had some nice throws."

Carolina did not trail in the first half, taking a 10-3 lead on Chuba Hubbard's slashing 21-yard run early in the second quarter.

After that, Gardner-Johnson said Saints defenders were resolved to "tackle better and run to the ball - play with passion."

They did not allow a point the rest of the way.

New Orleans looked primed to tie it when P.J. Williams dislodged the ball from Darnold on a sack and Marcus Davenport recovered, giving the Saints the ball at the Carolina 13. But New Orleans had to kick a field goal after three unfruitful plays.

With just more than a minute remaining in the half, the Saints faced a third-and-11 from their 3. Conventional wisdom would have been to run the ball and then punt because Carolina had no timeouts. Instead, Hill let fly a 28-yard back-shoulder throw that Callaway caught along the left sideline.

Hill then hit Lil'Jordan Humphrey for 18 yards and Callaway for another 15 before New Orleans used its last timeout. Hill completed one more quick pass to set up Maher's third field goal as the half ended to make it 10-9.

"We go from possibly having a punt backed up to putting the ball at midfield and then transitioning to a field goal," Payton said. "You start doing the math on how that half could have ended - I do think (that drive) was important."

Most of the third quarter was played on Carolina's side of the 50, but the Saints had one promising drive stall on an intentional grounding penalty and the another ended with a field goal.

Saints right tackle Cesar Ruiz, a second-year pro, was New Orleans' only starting lineman to play. Left tackle Terron Armstead (knee) was scratched for the sixth time in eight games. Right tackle Ryan Ramczyk and center Erik McCoy both were on COVID-19 reserve and left guard Andrus Peat has been on injured reserve since late October.

Saints safety Williams appeared to hurt his left ankle in the second quarter.

Saints: travel to Atlanta, which has been eliminated from playoff contention, to finish the regular season.