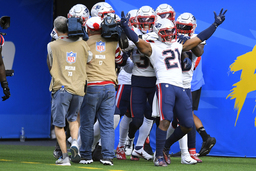 INGLEWOOD, Calif. (AP) Adrian Phillips has been gone from the Los Angeles Chargers for nearly two seasons. He got his greatest revenge against his former team on Sunday.

The New England safety intercepted two passes and returned one for the go-ahead touchdown as the Patriots rallied for a 27-24 victory over the Chargers.

"Everybody always wants to kind of stick it to their former team," said Phillips, who had the first multi-interception game of his eight-year career. "Just to be able to go out there and end up having the game that I had was sweet. I loved it."

On a day when Mac Jones and the offense struggled, the Patriots (4-4) needed all three phases to come through as they won their second straight and third in their last four.

"All in all we made the plays that we needed to make in the fourth quarter, which is something we hadn't done as well early in the year," Patriots coach Bill Belichick said. "Obviously AP's two picks were the difference in the game. He does a good job of seeing the routes, the quarterback, and having vision on the ball."

Phillips, who played six seasons for the Chargers (2014-19) before signing with the Patriots last year, came up with the first pick-six of his career with 10:40 remaining in the fourth quarter. Herbert was way off on a pass intended for tight end Jared Cook, who didn't look back as he was running his route. Phillips made a diving grab, got up and then went 26 yards up the left sideline to put the Patriots back in front.

Jones then connected with Jakobi Meyers on the 2-point conversion to give New England a seven-point advantage.

"We ended up getting pressure on Herbert, which was our big focus all day. He made a quick decision and Cook wasn't ready for it," Phillips said. "I was able to take advantage of that, get both hands on it and go to the end zone."

Chargers coach Brandon Staley, who saw his team fall to 4-3, said the play was a check to the flat, but that there was miscommunication between Cook and Herbert.

"I have to be smarter about that. I have to move on to the next read, but that's one of those plays that you need to just watch and get better from," Herbert said.

Jones, who had completed 70.4% of his passes in his first seven games, struggled with accuracy issues the first three quarters. But he was 4 of 4 for 43 yards on a 14-play drive in the fourth quarter that took up nearly seven minutes and resulted in Folk splitting the uprights from 30 yards with 2:21 remaining to put the Patriots up by double digits.

"It's not always going to be perfect, and for me sometimes that's really hard because I want it to be, you know, better than that," said Jones, who was 18 of 35 for 218 yards. "I think everyone around me had a great day, and that's what football is all about."

Damien Harris had 23 carries for 80 yards, including a 1-yard carry off left guard to tie the game at seven midway through the first quarter.

Herbert was on pace for a career-low game before going 6 of 9 for 70 yards late in the fourth quarter, including a 24-yard score to Joshua Palmer with 40 seconds remaining for his first NFL touchdown.

Herbert was 18 of 35 for 223 yards with two touchdowns and two interceptions. Austin Ekeler had 124 scrimmage yards (64 rushing, 60 receiving). His 5-yard run to cap off the opening drive of the first quarter was his eighth TD of the season.

"I loved the way we started the football game, but I didn't think that we established any rhythm after that," Staley said. "That second quarter was tough for us. We did not establish anything in that quarter."

Los Angeles grabbed a 14-7 advantage early in the second quarter when Herbert connected with Keenan Allen for a 5-yard TD. New England would cut the margin to one at halftime on a pair of field goals by Folk.

"We shouldn't have lost. We beat ourselves in the foot. Penalties, turnovers, drops, you name it, we did it," Allen said.

Allen's touchdown was set up by a 75-yard run by Justin Jackson. On second-and-10 from the Chargers 14-yard line, the fourth-year running back made a couple nice jump cuts that caused defenders to miss near the 20 before breaking free up the left sideline. Jackson was eventually tackled by J.C. Jackson at the Patriots 13.

Not only was it was it the longest run of Jackson's career, but it was the Chargers' second-longest run in the past 10 years. Melvin Gordon had an 87-yarder at New England in 2017.

Jackson, though, suffered a quad injury and did not return.

Chargers: CB Michael Davis suffered a hamstring injury during the second quarter and did not return. CB Asante Samuel Jr. was being evaluated for a concussion.