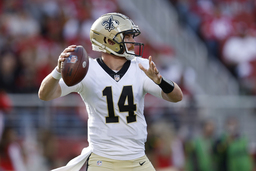 TAMPA, Fla. (AP) The Tampa Bay Buccaneers aren't in a position to make any assumptions about their chances of winning the woeful NFC South.

With Tom Brady at quarterback, a talented group of offensive playmakers around the seven-time Super Bowl champion, as well as a top-10 defense, the first-place Bucs (5-6) seem to have everything it takes to shrug off a disappointing start and repeat as division champions.

Brady and company have already lost more games they did all last season. And holding off the Atlanta Falcons (5-7), Carolina Panthers (4-8) and New Orleans Saints (4-8) in a race in which all four teams currently have losing records may be their only path back to the playoffs.

The stretch run begins Monday night against the last-place Saints, who despite losing to Tampa Bay at home in Week 2 have had more success against Brady than any opponent since the 45-year-old quarterback left the New England Patriots in 2020.

"The object at the beginning of the year is to win the division. That's still intact for us and it's still alive for us, so that's what we're trying to do," Bowles added. "If you get in and get on a run, you don't know what's going to happen. ... We understand we've got the Saints Monday night. It's a big game for them, a big game for us, so we've got to be ready."

New Orleans has won seven of the past eight regular-season meetings between the division rivals, although Tampa Bay did win a road playoff matchup against the Saints on the way to a Super Bowl title two years ago.

A victory at Raymond James Stadium, where New Orleans has won four in a row, would propel the Saints closer to the top.

"We'll use whatever motivation we can find," New Orleans coach Dennis Allen said.

"We've got five opportunities to go out there and right our wrongs," linebacker Kaden Ellis said. "It's crazy that we still have the opportunities, but we do. So that's the mindset. Let's go get it done. Let's go be the team that we've always said we can be.

"We know it hasn't been pretty so far, but the opportunity is still there, so let's do it."

Although the Saints were shut out for the first time in 21 years last weekend at San Francisco, Allen wasn't dissatisfied with the performance of the offense.

"What I was pleased with is that we gave ourselves a lot of opportunities," Allen said. "In the second half, we actually moved the ball pretty effectively offensively."

Indeed, the Saints failed to score despite lining up 16 times with the ball spotted between the San Francisco 30- and 1-yard lines.

On one of those instances, the Saints committed a false start on fourth down, followed by Wil Lutz's missed 38-yard field goal attempt. On another occasion, running back Alvin Kamara fumbled near the goal line. Later, Dalton was sacked on fourth-and-goal.

The Bucs, who are 2-1 within the division with a loss to the Panthers and wins over the Saints and Falcons, will face each of their division rivals once down the stretch. They'll also take on Cincinnati at home and San Francisco and Arizona on the road before closing the regular season against Carolina in Tampa and at Atlanta.

While Allen concedes he's frustrated by the Saints' penchant for committing self-defeating errors, he's rarely seen getting in players' faces and scolding them on the sideline or at practice.

This season, the Saints have a minus-14 turnover differential, by far the NFL's worst.

"I don't think yelling and screaming is the answer," Allen added. "I haven't found that when I yell and scream at my kids, that the product changes. Usually when you teach, that's when those things change."