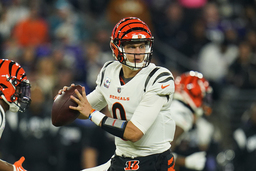 NEW ORLEANS (AP) The last time the Bengals' Joe Burrow and Ja'Marr Chase played in the Superdome, they connected for 221 yards and two touchdowns in LSU's run-away national championship triumph over Clemson - after which Burrow memorably celebrated by puffing on a cigar.

"I hope he doesn't smoke a cigar Sunday," said New Orleans Saints defensive end Cameron Jordan, whose team hosts Cincinnati for a Week 6 clash that has been marked on Louisiana football fans' calendars since the NFL schedule came out.

Jordan, who was drafted by the Saints in 2011 and made New Orleans his family's year-round home, was in the dome on Jan. 13, 2020, when Burrow and Chase helped unbeaten LSU cap off the greatest season in the history of a program that dates back to 1893.

"Of course I was there and saw it," Jordan said. "That has nothing to do with what we have to face Sunday."

Burrow, who also won the 2019 Heisman Trophy at LSU, won't deny his sentimental attachment to the stadium and state where he'll play this weekend wearing Tiger stripes of a different color. But he doesn't expect that to distract him from the task at hand.

"It's a place where a lot of good memories were made. But it's a business trip and we're going in there to win a game," Burrow said. "I'm excited to go back to see all the fans that supported me, but they're not going to be cheering for me this time."

The Bengals (2-3) and the Saints (2-3) both are trying to build some positive momentum after stumbling out of the gate.

"We're finding our stride, slowly but surely," said Burrow, whose team is coming off a narrow loss at Baltimore. "We're learning a lot of lessons from each game."

The Saints are starting to feel the same way.

During a recent three-game skid, the Saints' offense was stagnant for two-and-a-half games. But New Orleans seemed to find a rhythm in the second half of their Week 4 game against Minnesota, when they scored 17 points and narrowly missed a 61-yard field goal attempt to tie it at the end of a 28-25 loss.

The offense continued to roll in Week 5 in a 39-32 victory over Seattle, boosted by big games from Taysom Hill and Alvin Kamara, as well as steady play at quarterback by Andy Dalton, who has started twice since Jameis Winston went out with back and ankle injuries.

"We've been playing in a nice little rhythm," Saints offensive coordinator Pete Carmichael Jr. said. "But it's a long season and we've got to continue to do that."

"We love all those guys, miss those guys," Kamara said, but added: "They're the enemy right now."

Bell, who was adept at creating turnovers with New Orleans, has three interceptions and a forced fumble for the Bengals this season. The Saints' 13 lost turnovers are worst in the NFL.

"I was just thankful to be with him for his start at Ohio State," Werner said. "Once he left, I knew he was going to have great success."

All three of the Bengals' losses have been decided by field goals on the last play of the game.

Last Sunday against Baltimore, Cincinnati had a 17-16 lead with 1:58 left in the game, but Baltimore's Justin Tucker ended up winning it 19-17 with a 43-yard boot as time expired.

Going back to Week 2 against the Cowboys, the Bengals battled back from a 17-3 deficit to tie the game with 3:45 left. Brett Maher's 50-yard field goal as time expired won it 20-17 for Dallas.

In Week 1, Cincinnati trailed Pittsburgh 17-3 in the second quarter, tied it at 20 with 2 seconds left in regulation. But typically reliable kicker Evan McPherson missed the point-after to force overtime. Chris Boswell's kick as OT expired won it for Pittsburgh.

"We just have to keep taking our shots," Bengals coach Zac Taylor said. "And these things have a way of balancing out, and we are going to get some of these wins in these situations."

OUT OF THE MUD

The Bengals showed signs in the second half of Sunday's game of finally getting their running game going.

An overhauled offensive line was supposed to improve the ground game, but through the first four games, Joe Mixon averaged just 2.6 yards per carry. Last Sunday, he averaged 5.6 yards per carry, much of it after contact.

"We started finding a rhythm there with the run and pass really at the end of the second quarter and all the way through the rest of the game," Taylor said. "It was just too little, too late."

With Winston on the mend but not yet practicing fully, Dalton is expected to make his third straight start. If Dalton plays well again, it could make for a tougher decision when Winston is ready to return.

But Dalton likely will have to make do once again without top receiver Michael Thomas (foot) and veteran receiver Jarvis Landry (ankle), who also missed last week's game and didn't practice Wednesday or Thursday. The Saints are hoping rookie Chris Olave, who leads the team in catches (25) and yards receiving (398), will be able to return from a concussion after he was limited in practice Thursday.