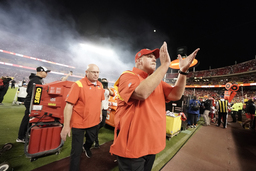 KANSAS CITY, Mo. (AP) In one of the wildest playoff games in NFL history, the Bills and Chiefs traded the lead three times and scored 25 points in the final 2 minutes of regulation, including a 13-second field-goal drive by Kansas City to force overtime that folks in Buffalo are still trying to live down.

The Chiefs went on to win that game in January, ending Buffalo's season at Arrowhead Stadium for the second consecutive year, and leaving Josh Allen and the rest of the heartbroken Bills counting the days until Sunday.

That's when they get another shot at the team that's becoming their nemesis.

"I mean, I think there are a lot of things you can take away from that game that can help you," said Allen, whose Bills also lost the 2020 AFC championship game at Kansas City. "Again, that's neither here nor there right now, but it's a situation - we can take a lot from that and try to apply to practice and when we play."

There's an argument to be made both teams are better than they were last year.

"They're a really good team. They've been there for a long time. Andy Reid-coached football teams win and they win often, and they sustain it and they're really tough at home," said Bills coach Sean McDermott, who worked under Reid in Philadelphia more than a decade ago. "So really good opponent. We have a lot of respect for them."

The respect is mutual, and it's only grown over the years. This will be the fifth time since 2020 the two teams have met, including those two playoff games at Arrowhead Stadium.

"We know it's going to come down to the wire every time we play them," Chiefs quarterback Patrick Mahomes said. "To see the guys respond (in January) when it looked like it was over, that's something you're always going to have."

Indeed, the Bills appeared to have the game won when Gabe Davis caught his playoff-record fourth TD pass to give them a 36-30 lead with 13 seconds left. But that was enough time for Mahomes to complete two long passes and set up Harrison Butker's 49-yard field goal to force overtime, where Kansas City scored on the first possession to win.

To this day, the words "13 seconds" continue to haunt Bills fans.

"Well, I mean, that did happen. That's part of our past on one hand, but it's also part of our past," McDermott said. "This team will take on its own identity. You learn from things like that and you move forward."

Allen and Mahomes each eclipsed 300 yards passing with three touchdowns, completed at least 70% of their passes without an interception and led their teams with at least 65 yards rushing in their January showdown.

No other quarterback in NFL history has done that in a game, regular or postseason.

The burgeoning rivals are also good friends, though, and found themselves on the same side in June, when they teamed up against Aaron Rodgers and Tom Brady in a match-play golf event. Rodgers made a walk-off 15-foot putt for the win.

The Bills' injury report listed 15 players this week with the most notable being safety Jordan Poyer, who sat out last week with a rib injury, and cornerback Christian Benford, who had a broken hand. Linebacker Tremaine Edwards (hamstring) and tight end Dawson Knox (foot/hamstring) also were limited after missing one game apiece.

The Chiefs are thin on defense, where cornerback Rashad Fenton is dealing with a hamstring injury, safety Bryan Cook is in the concussion protocol and defensive tackle Tershawn Wharton is out after tearing his left ACL on Monday night.

After chasing Mahomes for several years in Denver, Bills pass rusher Von Miller finds himself doing it again for Buffalo. But don't think for a moment that there's ill will between them. In fact, the two Texans are quite fond of each other.

"We got the same financial advisor," Miller said, "so no matter what I do, I could never get away from Patrick Mahomes."

Fewer than two dozen players have caught four or more TD passes in a game. Two of them will be playing Sunday. Davis did it against Kansas City in January while Chiefs tight end Travis Kelce did it last week against the Raiders, when all four of his touchdown catches came from inside the 10-yard line.

The Bills are 2 1/2-point favorites, according to FanDuel Sportsbook, making it the first time in 42 home starts Mahomes will take the field as an underdog. That includes 11 starts in the playoffs, two of those against Buffalo.

"It is what it is," Mahomes said. "Our job is to go out there and win a football game. It's a tough place to play at Arrowhead; they've won here before. But we've also handled business before. It's up to us to do that Sunday."