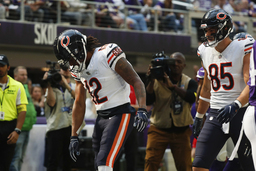 The Chicago quarterback finally showed signs of progress by delivering his best performance this season, and the Bears staged a big comeback, only to come up short in the closing minutes.

They hope those promising steps continue when they host the struggling Washington Commanders in a Thursday night matchup.

The former Ohio State star was 15 of 21 for a season-best 208 yards and a touchdown.

Fields credited the team's yoga instructor for helping him incorporate breathing exercises the past week or two that he said aided him in staying calm during the game.

"I think just doing that automatically keeps me more calm in the pocket and really just during the game," he said. "I don't even like doing pregame speeches because I feel like I'm so much calmer than everybody else. When the defensive guys are all juiced up ready to go, I just try to stay chill the whole time."

It was an encouraging step for Fields, who ranks at or near the bottom among starting quarterbacks in just about every important passing category. He helped the Bears (2-3) rally from 18 down against Minnesota to grab a 22-21 lead and had them driving after a late touchdown run by Kirk Cousins that put the Vikings back on top.

That last-gasp effort ended when Ihmir Smith-Marsette failed to get out of bounds and was stripped by cornerback Cameron Dantzler Sr. at the Minnesota 39 after a 15-yard reception.

The Commanders (1-4) come in with four straight losses since holding on to beat Jacksonville in their season opener. Tennessee beat them 21-17 last week.

"I feel good about what we have," coach Ron Rivera said. "It's just now a matter of putting it together."

There might be a few people tuning in just to hear Al Michaels on the broadcast.

The famed play-by-play announcer had social media buzzing during last Thursday's Colts-Broncos yawner that featured seven field goals, a dozen punts, 25 third down stops, four interceptions and six fumbles - with none recovered by the defense.

Indianapolis prevailed 12-9 in overtime in Denver. Michaels, however, might have been the game's top performer with zingers such as this:

"This is the type of game you'd have as the fifth regional on CBS on Sunday."

"It's first-and-goal. Words I thought I would never speak tonight."

Even though he threw an interception with 6 seconds left just outside the end zone to seal the Commanders' 21-17 loss to Tennessee, Carson Wentz is still unquestionably their starter.

Rivera, who got into some hot water for saying "quarterback" was the reason his team was behind the NFC East rivals in rebuilding, has shown zero indication he'd even consider benching Wentz, who has thrown 10 touchdowns and six picks this season.

Wentz showed up on the injury report this week with a shoulder issue that he and Rivera downplayed.

The Bears figure to have their best coverage defender back with cornerback Jaylon Johnson expected to return after missing three games because of a quad injury. Johnson, who had a forced fumble and four tackles through the first two games, would have been a full participant had Chicago practiced Monday and Tuesday.

Rivera, a linebacker on the Bears' 1985 champions and the defensive coordinator on their 2006 Super Bowl team, said he was "past" coaching in Chicago. He did it three times already with Carolina.

It's Commanders left tackle Charles Leno's first game back since the team he played his first seven seasons with cut him in May 2021.

Receiver N'Keal Harry could make his Bears debut after being activated from injured reserve. Acquired from New England in July, the 2019 first-round pick suffered an ankle injury in training camp that required surgery. Harry never developed into the playmaker Patriots coach Bill Belichick hoped he would become.