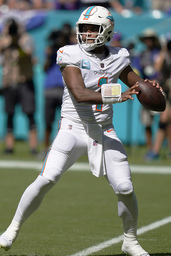 CINCINNATI (AP) The Miami Dolphins outlasted the Buffalo Bills last week to start the season 3-0 for the first time since 2018.

The early going for the Cincinnati Bengals has been surprising, too, but in a different way.

The defending AFC champions lost their first two games before rediscovering their 2021 chemistry and beating the New York Jets 27-12 on Sunday.

The Dolphins snuck out of last week's hyped showdown with a 21-19 win over the Bills thanks to some clock mismanagement at the end. Buffalo ran out of time trailing by two points and trying to get in position for a potential game-winning field goal.

The Dolphins and Bengals won't have long to ponder the nature of their important wins. They have to come right back and play each other in Cincinnati on "Thursday Night Football."

The short week didn't come at a good time for Dolphins quarterback Tua Tagovailoa, who has a sore back and ankle that has limited him in practice. He also took a big hit in last week's game that left him temporarily woozy, but he returned to the game.

Tagovailoa is listed as questionable for Thursday. If he can't go, backup Teddy Bridgewater will play.

"I've been up here getting treatment, doing everything I can to get as close to 100% as possible," Tagovailoa said Tuesday.

The 24-year-old former Alabama star has been sharp, completing 71% of his passes and throwing eight touchdown passes through three games.

That's half his total from 13 games last season. His 925 passing yards are second in the NFL this season to the Bills' Josh Allen.

"Our team very much understands that Thursday night games do great things for the league in terms of fans are able to see a Thursday night game and all the revenue that it brings, but it's a challenge nonetheless," McDaniel said.

"And there's no perfect formula. You got to sleep, you got to eat right, honestly, you've got to rest. But the bottom line is, both teams are on short weeks. It's out of the norm. You only do it once a year, so you're not going to be used to it."

After losses in the first two weeks, quarterback Joe Burrow told everyone to just relax because the Bengals would come around. Joey Franchise was right. He threw three touchdown passes, the overhauled offensive line worked well together, and the defense held the Jets to four field goals in the win.

The Dolphins have used the fourth quarter to mount comebacks in Week 2 and Week 3. On Sunday, running back Chase Edmonds scored the game-winning touchdown in the fourth quarter, but most importantly, the Dolphins kept Allen and the Bills out of the end zone in the second half.

Miami's two key defensive stops in the final 10 minutes of the game - one a turnover on downs, and another key tackle inbounds to help the game time expire - sealed the win.

For all of the praise that WR Tyreek Hill has gotten, justifiably, for his immediate on-field impact since joining the Dolphins, Jaylen Waddle has been just as productive so far this season. Waddle has two straight 100-plus yard receiving games and actually leads the Dolphins in total yards (321) and touchdowns (three).

In just his second season, Waddle has 123 receptions through 19 games, the second most of any player in their first 20 games.

Hill stirred up some controversy this week after he called out Bengals cornerback Eli Apple. Hill and Apple faced each other in the playoffs last year when Hill played for the Kansas City Chiefs.

Apple stayed quiet about it Tuesday, but fellow cornerback Chidobe Awuzie laughed it off.

"It's football. It's entertainment," he said. "That's what people want to hear. It was funny. We were all laughing about it. It's a competition."

Burrow was asked what he thought of the alternate uniforms the Bengals will wear on Thursday night, all white with - for the first time - white helmets with black tiger stripes.

"I'll play in trash bags," Burrow said. "I don't really care what we wear out there."