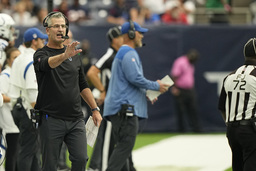 Maybe it's reality for a promising team or maybe it's misguided optimism stemming from a new head coach, a new staff and new players in every direction. Either way, the Jags (0-1) should have a better gauge when they host AFC South rival Indianapolis (0-0-1) on Sunday.

The Colts, coming off a disheartening tie at Houston that cost kicker Rodrigo Blankenship his job, are widely considered the team to beat in the division and have spent the last eight months waiting for this rematch.

Jacksonville knocked Indy out of the playoffs in the 2021 season finale, a 26-11 drubbing that prompted the Colts to change quarterbacks in the offseason. It was Jacksonville's seventh consecutive home win in the series, a head-scratching skid for the Colts that they insist is more of a fluke than a fundamental flaw in how the teams stack up at TIAA Bank Field.

"It's not just us and Jacksonville. There are other teams that have this same problem, just other ways," Indy running back Nyheim Hines said. "If you're a team in the NFL, of all 31 teams, there's going to be somebody that is going to have your number every time you play them or match up."

The Colts haven't won in Jacksonville since 2014. Coach Frank Reich is winless in four trips, and no one on the team's current roster has experienced a victory in Jacksonville with Indy.

"It's like an interesting, unique kind of situation having gone down there and not won for seven years," Colts defensive tackle DeForest Buckner said. "It's hard. I can't put my finger on it. But every year is a new year."

It's one of the few positive streaks going for Jacksonville, which extended its road and NFC skids to 18 and 17 games, respectively, last week against the Commanders.

The franchise's first game under new coach Doug Pederson was a mistake-filled mess. The Jaguars had 13 penalties, dropped a surefire touchdown pass and struggled with the basics on both sides of the ball.

"You have to move on, take the positives and learn from the negatives," quarterback Trevor Lawrence said. "We got a great opportunity this week. Obviously, we need a win, not because of the losses we've had in the past but because we started 0-1 last week. ... This would be huge for us."

The Colts are taking the same approach, especially after their last seven road trips in the series.

"Sometimes you get these things in sports like this that you just can't explain it," Reich said. "The explanation is that every time we've played down there, they've outplayed us and outcoached us."

Former Jaguars coach Gus Bradley is making his third return trip to Jacksonville as a defensive coordinator. This time, he won't see many familiar faces on the opposing sideline. Only one player from Bradley's tenure (2013-16) in Jacksonville remains: longtime backup center Tyler Shatley.

"He's a great dude," Shatley said. "It's pretty crazy to think about being the last guy from that regime. But here we are. There's still a lot of guys still playing from back then, but they're in other places."

Colts defensive end Yannick Ngakoue is one of them. Drafted by Jacksonville in the third round in 2016, Ngakoue is playing for his fifth team in four years. He ranks second on Jacksonville's all-time sack list with 37 1/2.

Ngakoue had two sacks in his first game against the Jaguars, which came in Baltimore in 2020.

"It's always fun playing against Yan," Jaguars left tackle Cam Robinson said. "He's such a good player. Down-in and down-out, he's a high-motor guy, a lot of speed around the edge, a lot of twitchiness, a lot of suddenness. He never took a play off in practice, which meant I could never take a play off."

Pederson and Reich remain close friends after teaming up to win the Super Bowl with Philadelphia following the 2017 season. Reich left the Eagles following their title run to return to Indy. Pederson took the Jags' job this year after spending last season out of coaching.

"I talk to him frequently, obviously not during the season but in the offseason, a couple of times a month," Reich said. "I think the world of him. Great, class-act person, really great football coach. It's kind of exciting, you know, he's in our division."