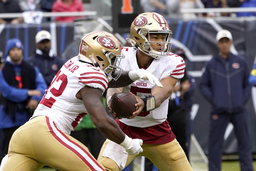 SANTA CLARA, Calif. (AP) The offseason story for the Seattle Seahawks and San Francisco 49ers focused on the change at quarterback.

One week into the season, the transition seems to be going a little bit smoother in Seattle than in San Francisco.

Geno Smith fared well in his first game since the Seahawks traded franchise icon Russell Wilson, besting him in an emotional season-opening win.

Trey Lance didn't fare nearly as well in a surprising opening loss for San Francisco at Chicago, adding a little bit of urgency to this Week 2 meeting between the 49ers (0-1) and Seahawks (1-0).

Lance completed 13 of 28 passes for 164 yards and an interception. He added 54 yards rushing on 13 carries.

"I missed a few early," Lance said of his performance in the 19-10 loss to Chicago. "We made too many mistakes early. I missed too many early. I'm going to turn the page on that."

Smith almost didn't miss early in Seattle's 17-16 win over Wilson and the Broncos. He was 17 of 18 for 164 yards and two touchdowns in the first half to stake the Seahawks to a lead they didn't relinquish.

"He played great," coach Pete Carroll said. "He did exactly like we would hope he would do. We hoped he was going to make every pass and he almost did. He was rolling, a little shaky getting started in the second half, but it wasn't him. It was just stuff that occurred, and we weren't just quite as productive."

The Niners probably won't miss seeing Wilson in a Seahawks uniform. He started 21 games against San Francisco since joining the league in 2012, winning 17 of them, including one in the 2013 NFC title game. That's tied with Pro Football Hall of Famer Johnny Unitas for the most wins by any quarterback against San Francisco.

"It will be a different game plan," defensive lineman Arik Armstead said. "Russ has his ways to put pressure on the defense. Geno is a great player, too. It will just be a little bit different of a challenge."

For the second straight season, the Niners lost their starting running back to a knee injury in the season opener. Elijah Mitchell, who took over the job after Raheem Mostert in 2021, will be out two months after hurting his knee last week.

That gives Jeff Wilson Jr. a chance to be the lead back. Wilson has started nine games at running back over the past four years, averaging 81.2 yards rushing in those games and scoring eight TDs.

"It's time to show everybody what I can do," Wilson said. "I want to show that I belong and I'm a top guy in this league."

Seattle will begin another lengthy stretch without Jamal Adams on the field against the 49ers. Adams suffered a significant injury to his quadriceps tendon in the opener. It's a major blow to Seattle's defensive plans for this season. Adams was expected to be used all over the field, both as a deep safety and as a pass rusher.

Seattle will turn to the combo of Josh Jones and Ryan Neal to fill Adams' role. Jones started 13 games two seasons ago for Jacksonville, and Neal has been used in a variety of roles for Seattle in recent years.

"(Neal) can play in dime, and he can play in the back end. Josh has played safety, as we already know, but he can play the dime spot as well," Seattle defensive coordinator Clint Hurtt said. "The one thing is that these guys have been dual trained to play multiple positions, so there is versatility within the scheme."

The 49ers were done in last week by penalties, committing 12 for 99 yards in the loss to Chicago. The penalties handed the Bears five first downs in the game, including drive-extending personal fouls on third down by linebackers Dre Greenlaw and Azeez Al-Shaair.

"I think a few of them were definitely avoidable," Shanahan said. "I expect us to be a lot cleaner this week."

PLAYER OF THE WEEK

Pass rusher Uchenna Nwosu made quite the first impression to his Seattle tenure getting named NFC defensive player of the week. Nwosu had seven tackles, one sack, one pass breakup and one forced fumble against the Broncos.

Seattle was hopeful to get that kind of production from its edge rushers by changing to a 3-4 defensive front. It may be a bit more difficult this week with Lance's ability to use his legs as a runner.

"I'm just trying to work to put more respect on my name. This is a step in the right direction, so I'm going to keep it up and keep trying my best to keep proving myself."