Wild GM Guerin: We want both Fleury and Talbot back in net 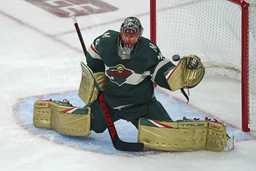 ST. PAUL, Minn. (AP) The Minnesota Wild stocked their net with a three-time Stanley Cup winner at the trade deadline, fetching Marc-Andre Fleury to form an accomplished goalie tandem with All-Star Cam Talbot down the stretch of the best regular season in franchise history.

The Wild would prefer to keep the pair in place, general manager Bill Guerin said Tuesday, despite their lack of salary cap space and the recent reminder that such enviable depth typically doesn't mean as much during the playoffs.

"There's no controversy. There's no drama. We like both goalies. We like both people," Guerin said. "We want them both back, and we think we can be successful with both of them."

Fleury with his clutch-time credentials was given the net for the first five games of the first-round series against St. Louis. Once the Wild decided it was time to turn to Talbot, it was too late. The Blues finished off the Wild in six games.

"Obviously I was disappointed I didn't get to play more in the playoffs, but who's not? We're competitors. You want to play," Talbot said. "But the coaches had a decision to make, and I don't think there was a wrong decision. Obviously, you trade for a guy like that with his pedigree and his past, why wouldn't you start him Game 1?"

Talbot went 13-0-3 in his last 16 starts prior to the postseason. He allowed four goals in Game 6. With one year remaining on his deal, Talbot said he expects to return for 2022-23 and expressed no lingering ill will about being mostly left out of the playoffs.

The 37-year-old Fleury went 9-2 with a 2.74 goals against average and a .913 save percentage in 11 starts in the regular season arriving in the trade with Chicago that will cost the Wild a second-round draft pick. In the playoffs, he gave up 15 goals in five games.

Fleury's contract carried a cap hit of nearly double that of Talbot this season, but he will be a free agent in July. Being away from his family after the sudden change in teams was emotionally draining, but he raved about the chemistry within the team, the culture of the organization and the support around town.

"It was good to live this," Fleury said.

The Wild have 2021 first-round draft pick Jesper Wallstedt waiting behind them. The 19-year-old native of Sweden signed his entry-level contract this season and is likely bound for a development season in the AHL in Iowa.

But there's no reason why the Wild won't again push for a deep run in the playoffs, despite the dead weight from the buyouts of former franchise players Zach Parise and Ryan Suter. They'll each cost more than $6.3 million against the Wild's cap next season.

"We'll deal with it. I think we'll be every bit as good next year. I do," Guerin said. "Would we love to have that cap space? Of course we would. But we knew exactly what we were doing."

Even if both goalies aren't back, the Wild will have a tough time keeping left wing Kevin Fiala, who will be a restricted free agent after a career-high 33 goals. He was scoreless in the playoffs.

"It's just such a shame to go out like that," Fiala said.

"We'd love to have Kevin back," Guerin said. "I don't know if it's going to be possible."