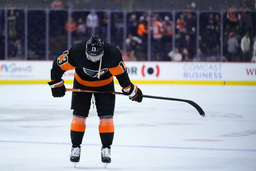 T.J. Oshie also scored for the Capitals, who finished 3-3 on a six-game trip. Charlie Lindgren made 29 saves.

Ovechkin iced it, scoring into an empty net with 1:35 left and adding another empty-netter with 8.2 seconds left for his 15th of the season. Ovechkin has 795 career goals, good for third all-time. He is six goals away from tying Gordie Howe for second place. Wayne Gretzky, with 894 goals, tops the list.

"You watch him every night and how hard he plays, how much he cares, that's what you don't see sometimes," Capitals coach Peter Laviolette said. "You see his passion on the ice. I always think when you coach somebody, you get a better feel and a different read for him. And he loves the game, and he loves coming to the rink and he plays hard every day. ... And it's been great to be a part of it to this point."

Ovechkin netted his 50th and 51st career empty-net goals and is five away from Gretzky, who has the all-time lead in that category.

"It's crazy for us to see it first-hand," said Washington defenseman John Carlson, who had two assists. "It's special to see. Maybe we take it a little bit for granted because every single goal, every single game, every year, something big, a new milestone, it's incredible stuff."

Kevin Hayes scored for Philadelphia, which has lost 13 of 15 games. Carter Hart made 23 stops.

"We just struggle generating offense," Philadelphia coach John Tortorella said. "It's a problem here. Some is confidence, some is we just struggle offensively."

Strome broke a 1-all tie with 10:41 remaining when he deflected Carlson's shot from long range past Hart.

"We can't find a way to score the next goal in the third period," Tortorella said.

Hayes had a golden opportunity to tie it on a Philadelphia power play, but Lindgren made a great right pad save on a try from close range with 8:20 remaining.

Hayes scored his ninth goal of the season for his team-leading 28th point with 4:14 left in the first period to give the Flyers a 1-0 lead. Hayes rushed to the bench after breaking his stick on a slap shot attempt, and scored on a wrist shot from the high slot with his new stick.

The Flyers had a power-play goal for the third straight game and have four overall in that stretch. Philadelphia, which began play ranked 30th in the NHL in scoring on the man advantage, now has converted 16.7% (14 of 84) of its chances.

Oshie tied it 3:51 into the second on the Capitals' fourth power play as the Flyers continued to take sloppy penalties. This time, James van Riemsdyk committed Philadelphia's third tripping minor of the game. Oshie made them pay with his fifth goal of the season when he finished a nifty passing sequence with Strome and Evgeny Kuznetsov with a perfectly placed one-timer over Hart's left shoulder.

NOTES: Van Riemsdyk returned after missing the last 20 games due to a broken right index finger. . Flyers forward Tanner Laczynski was placed on injured reserve after departing midway through the third period of Monday's 5-3 win over Colorado with what looked like an injury to his left leg. . Washington was without several injured players, including starting goalie Darcy Kuemper (upper body). Kuemper was with the team, but missed his second in a row.